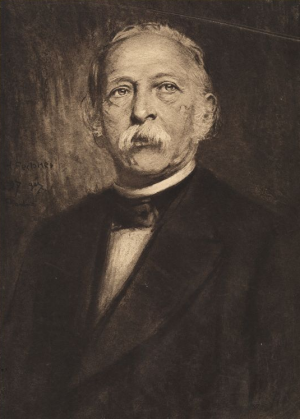 Theodor Fontane was a 19th-century German-language novelist whose works are still widely read in German but have been but little available to English-speaking readers. Fontane lived most of his life in Berlin, capital of Bismarck's newly-unified, thriving Germany. After years of successful journalism and travel writing, Fontane began writing novels in his late fifties and produced a novel every two or three years until the end of his life[1]. Several of these later works are considered masterpieces. No one has expressed the enduring public appreciation of Fontane's work better than Phillip Lopate, who wrote: "The novels of Theodor Fontane (1819-1998) are so sparking, polished, tender, sympathetic, delicately ironic, and psychologically astute that it is a wonder they are not better known by American readers."[2]

Fontane is known as a writer of realism, not only because he was conscientious about the factual accuracy of details in fictional scenes, but also because he depicted his characters in terms of what they said or did and refrained from overtly imputing motives to them. The world of these novels is one in which everyone seems powerless, constrained by convention if nothing else. The novels delve into topics that were more or less taboo for discussion in polite society of Fontane's day, including marital infidelity, class differences, urban vs. rural differences, abandonment of children, and suicide. His characters range from lower-middle class to Prussian nobility.

Fontane's novels are especially challenging to translate, because (for example) they may contain subtle, lyrical linguistic motifs, some of which are as clear in German as the famous musical motifs in Prokofiev's Peter in the Wolf, but which do not render equivalently into in English.

Lastly, these are not action novels. Some have been called novels of manners, and impatient readers may find the plot slow-moving. Character is often developed through a series of seemingly insignificant, everyday events; yet, there are no sentences or details which can be considered superfluous to the story's eventual shape.

This is still very incomplete, for now. 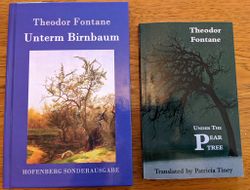 Untirm Birnbaum (Hofenberg ed. Berlin 2016) and the Tiney translation Under the Pear Tree (Belgarun ed. Huddersfield, Engl. 2009), side by side.

This still popular novella, first published in 1885, is a crime story, where almost from the outset, the reader knows that a murder is planned and carried out, and by whom. A village merchant and his wife, over the years, have fallen gradually into serious debt, and the person sent to collect the amount due disappears. The details of the crime remain untold, while the narrative focuses on what others think happened, how a small town's community opinion vacillates over time, and how the community opinions affect the perpetrators. The reader cannot easily predict whether they will ever be caught. As with some other of Fontane's best works such as Effi Briest and Beyond Recall, the plot was patterned roughly around a real event reported years before the novella was written and that Fontane had read about. The majority of the novel consists of richly nuanced conversations among the town's denizens about the married couple at the center of the controversy.

There is at least one English translation:

This novel is about an affair between a wealthy officer and a lower-middle-class Berlin girl. Some English translations exist:

(description tbd). At least one English translation has been made: 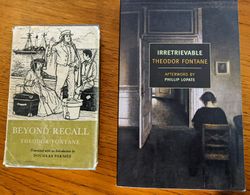 Reams have been written about this book, and it has been televised and made into movies (in German) more than once. Like other of Fontane's works, the plot of this haunting novel is based upon an actual event which he read about in a newspaper. It takes place in Holstein in 1859-1861, five years before the German/Danish war, and is the story of a troubled marriage. The novel was long inaccessible to English readers, though the German text is now available free for electronic readers. The novel has linguistic motifs in the same way that "Peter and the Wolf" has musical motifs, presenting a particular challenge to translators, but by now, two different English translations exist. Three different, perfectly plausible translations have been used for the title, which has a literal meaning of "Unbringbackable". It could just as easily have been translated as Gone with the Wind, had that title not already been attached to a different author. The translations to English are:

The novel's plot is deceptively simple: a religious and serious-minded woman marries a responsible but light hearted nobleman, they have two kids and live by the sea peacefully for years, until the husband is suddenly called to attend the court in Copenhagen. The husband becomes infatuated with a young woman at court and leaves the wife (only to be rejected immediately by the young woman). Husband and wife eventually reunite, but soon afterwards, she commits suicide.

This novel is about attempts by a schoolmaster's daughter to marry new wealth.

This novel is about a wronged husband conventionally seeking retribution for a long-past affair. At least one English translation has been made: