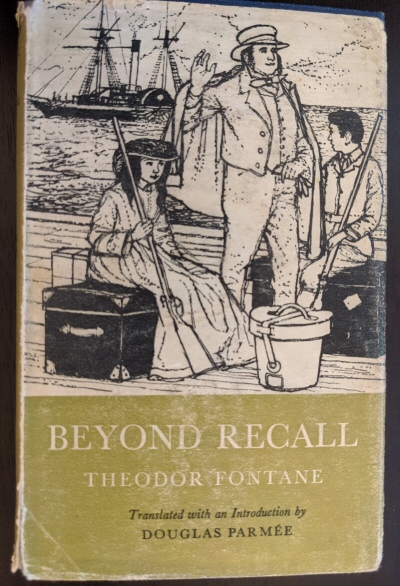 Front cover of Beyond Recall

Beyond Recall (in its original German: Unwiederbringlich, literally approximately "irrevocably lost"), is one of realist Theodor Fontane's German novels, first published in German in 1891. As with some other of Fontane's mature novels (including Effi Briest), its heroine is believed to be based roughly on a real person, and it treats near taboo (at the time of writing) topics including adultery, divorce and suicide. Long a popular classic to German readers (and with reams of literary criticism written about it), this novel has scarcely ever been available to English readers. One out-of-print translation has been published. There also is a 1968 German made-for-TV film Unwiederbringlich, directed by Falk Harnack.[1]

As for translating this haunting novel into English, even deciding on a translation for the title presents many choices in English (irrecoverable, unrecoverable, irretrievable, unrepeatable, beyond recall, past retrieval, beyond retrieval and irreparable, just to name a few). The subtle wordplays and linguistic motifs which add to the power of its German text are challenging to render into English. This translation[2] was made by Douglas Parmée, while he was Fellow and Director of Studies at Queens' College, Cambridge.

The novel takes place in the years 1859-1861 in Holstein, five years before the German/Danish war, at a time when Holstein was governed by Denmark. Count Helmut Holk lives in a lonely valley with his countess, Christine, and their two children. Christine is serious and pious (from having been raised by nuns), whereas Helmut has a fun-loving nature. After Helmut is called from home to live at the Copenhagen court of the Danish princess, he becomes fascinated by a young noblewoman there, Ebba von Rosenberg, who flirts with him. His marriage with Christine, by contrast, begins to seem unbearably dull, and he rashly seeks a divorce from his wife. However, he soon realizes that Ebba's attentions were not serious, and he ends up alone. A long separation of Helmut and Christine ensues. Only after years and great efforts by friends is a reconciliation with Christine engineered. Although on the surface all seems well, Christine is haunted by the previous rejection and drowns herself in the sea.

Editions (from German equivalent of this page)