From Citizendium
< Terrorism
Jump to navigation Jump to search 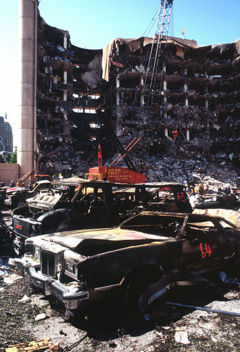 The bombed remains of the Federal Building in Oklahoma City after a terrorist bomb exploded killing 168 and wounding another 800, 19 Apr. 1995.

Terrorism refers to any act, nearly always violent, unpredictable, and chaotic in nature, often targetting civilians, intended to create an atmosphere of fear in order to obtain a political objective. Terrorism has been practiced by both left-wing and right-wing political organizations, religious and nationalistic groups, revolutionaries, as well as — to use the somewhat controversial notion of "state terrorism" — armies, police, and security forces. Since non-governmental terrorist groups are generally small in numbers and have few resources available, they rely on dramatic and destructive hit-and-run acts of violence to seize the attention of the general population, thereby seeking to impose their influence through the publicity associated with their violence. Acts of terrorism include bomb scares and bombings, hijackings, assassinations, kidnappings, cyber-attacks, and attacks using biological, chemical, and — theoretically — nuclear weapons.

Terrorism has many definitions and the concept is the subject of much controversy. The term terrorism was first used in the 1790s to describe terror used by government during the French Revolution. [1]

Based on a survey of leading academics, there are at least 109 different definitions of terrorism (Schmidt & Jongman 1988). A compiled analysis of this survey identified the following recurring elements:

The common elements of terrorism, as stated by Ganor (2002), are “the use of, or threat to use, violence”; “the goal is to attain political objectives”; and “the targets of terrorism are civilians”. The most widely accepted legal definition is defined in Title 22 of the United States Code, Section 2656f(d), which states: "The term ‘terrorism’ means premeditated, politically motivated violence perpetrated against non-combatant targets by sub-national groups or clandestine agents, usually intended to influence an audience."

Often the definition of terrorism varies among the various agencies of a country's government, an example of this is in the United States:

There are basically three categories of state sponsorship of terrorism. These are as follows:

Planning is one characteristic that all terrorists share. A terrorist will never commit an act of terrorism in a desultory or senseless manner. Terrorist attacks are carefully planned to ensure the largest amount of publicity to spread their cause to the general population. A perfect example of this is the 1998 bombing of U.S. embassies in Kenya, which took al-Qaeda nearly five years to plan.

First, when planning a major attack, the terrorists must gather detailed intelligence on the intended target such as it's defenses and vulnerabilities. Logistics specialists assemble the weapons, communications equipment, and arrange transportation and escape routes for the team that will carry out the attack. Once all the preparations are complete, the terrorist team will execute the plan. Usually separate teams carry out each step for security reasons so if one team is captured, they can't tell about the other team.

All terror groups usually keep their plans secret, operating underground and away from the public and government authorities. Terrorists are often organized into small groups called terror cells which are part of a larger terrorist network and several cells can work together to plan a terrorist attack. Members of one cell usually only know about an adjacent cell, but aren't aware of any other cells. This means that if members of one cell are captured, the entire network will not be discovered. This way terror groups maintain secrecy and can plan their attacks to make them as surprising as possible.

The main targets of terrorism are innocent civilians, because they are easy to attack and create an atmosphere of fear. Other terrorist attacks target specific targets such as diplomats or their facilities such as embassies and consulates; military bases; police; business executives and corporate offices; water supply and pipelines; power facilities such as power plants, dams and power grids; and transportation facilities such as airplanes and airports, subways, trains and train stations, and buses and bus terminals. Buildings of political and economic importance are targeted as shown during the 9-11 Attacks in 2001 when the World Trade Center and the Pentagon were hit, while the US Capitol Building was targeted, but never attacked. [5] Most attacks on buildings are usually used to draw attention to the terrorist group rather than to cause death and destruction; though this is caused nonetheless.

The Soviet AK-47 Kalashnikov assault rifle is a favorite weapon of terrorists because of its low cost and high availability.

Historically, bombing is the most common terrorist tactic because of its simplicity and lack of the need of skill to create, plant, and detonate a crude bomb. Assassination, kidnapping, and assaults against well-defended targets require a much more sophisticated knowledge of organization, planning, and weaponry to pull off. These bombs can consist of commercially produced explosives such as black powder, TNT, plastic explosives; or commercially available materials made into homemade explosives, such as fertilizer (ammonium nitrate) mixed with diesel fuel; these homemade explosives are called "Improvised Explosive Devices" (IEDs). [6] Bombs can be either explosive or incendiary and the most effective bombs usually employ a shaped charge that moves the force of the blast in a specific direction. Bombs can be detonated by time-delay detonators which rely on clocks, watches, and other timing devices; remote-control detonators which use radio or other electronic signals; command-wire detonators use a button which is pressed to trigger the explosion.

Many terrorists use automatic firearms such as assault rifles, pistols, machine guns and submachine guns or rifles with sniper sights. Some terrorist weapons are made outside legal arms factories, these include the Soviet AK-47 Kalashnikov assault rifle and the U.S. manufactured M60 machine gun, which are manufactured in the northwest of the Indian subcontinent. These illegally manufactured arms are called "improvised firearms" [7] Terrorists have also used both small-sized and heavy-calibre mortars and rocket-propelled grenades or RPGs; the most widely used model of this weapon being the RPG-7. [8] The RPG-7 can pierce through up to 12 inches of the ceramic and reinforced steel layers of armor that protects military and police vehicles. Another favorite weapon of terrorists is the hand grenade and incendiary weapons like the "molotov cocktail" (a glass bottle of gasoline).

The earliest example of terrorism are the actions of the Jewish Zealots. Known to the Romans as sicarii or dagger-men, the Zealots engaged in violent attacks on Roman occupation forces and fellow Hebrews who were accused of collaboration with the Romans. The next group to show characteristics of terrorism were the Assassins. The Assassins were a breakaway faction of Shia Islam called Nizari Ismalis who used the tactic of assassination of enemy leaders. The tactics used by the Assassins involved sending a lone man to kill an enemy leader at the sacrifice of his own life, instilling fear in the enemy.

The French government under Robespierre systematically used terrorism during the French Revolution; the word "terrorism" was first used for his Reign of Terror. The agents that enforced the policies of the Reign of Terror were referred to as "terrorists". During Reconstruction after the American Civil War the Ku Klux Klan was formed by defiant Southerners against freed former slaves and supporters of Reconstruction. In the late 19th century small groups of revolutionaries were formed. These anarchists successfully assassinated heads of state from Russia, France, Spain, Italy, and the United States. But their lack of organization and refusal to cooperate with other social movements made anarchism ineffective as a political movement. However, Communism was just beginning as a ideological basis for political terrorism and the 20th century would bring about many new developments in terrorism.

Nationalism intensified around the world during the early 20th century and it became a powerful force in the various peoples of colonial empires. Native peoples from Egypt and Vietnam rebelled against the colonial regimes, using dramatic acts which were described as terrorism. [11] The Black Hand was a group active before World War I that was involved in the assassination of Franz Ferdinand, Archduke of Austria which was considered an act of terrorism that started the First World War. [12] After World War I terrorism became an official policy in states such as Nazi Germany and the Soviet Union. Adolf Hitler and Joseph Stalin, the leaders of these states, used arrest, torture, imprisonment, and execution to bring fear to the people of the country so they would not question their actions. Though the first example of modern terrorism was Algeria's Font de Liberation Nationale (FLN) which killed random French civilians. In 1956 France executed two Algerian rebels which caused the FLN to kill 49 French civilians in three days, bombing beachside cafes and raising the price of colonialism to levels too expensive for many colonial empires. The FLN's success inspired rebel groups around the world such as Basque and Quebecois separatists, Palestinian and Irish nationalists, and Marxist African and Latin American cabals. Terrorism was common in many nations, even well-developed ones, by the 1960s.

But Western terrorism of the 60s and 70s wasn't nearly as deadly as the violence in the Middle East that was yet to come. Yasser Arafat's Palestinian Liberation Organization (PLO) committed countless violent acts of terrorism including the massacre of 11 Israeli athletes during the 1972 Munich Olympics. But since the PLO's goals were political, rather than religious, Arafat decided to distance himself from terrorism to prove he could lead a government. As the actions of the PLO ended, Islamic fundamentalism spread throughout the Middle East, spawning groups such as al-Qaeda and Hamas. Hamas, the Liberation Tigers of Tamil Eelam, and other groups adopted suicide bombing tactics, not just to inflict damage, but for religious motivation. Many Muslims thought that the United States stood for satanic Western values and many terrorists, such as Osama bin Laden, made the United States their primary target. These terrorists thought that destroying the United States would be doing the work of God. Some of the deadliest terrorist attacks on US soil happened in the 1990s, including the 1993 World Trade Center Bombing and the 1995 Oklahoma City bombing, when 168 people were killed and another 800 injured. Several other American targets overseas were attacked including military installations in Saudi Arabia in 1996 [13] and U.S. embassies in Kenya in 1998. In response to this attack, the United States attacked several terrorist targets in Afghanistan and Sudan with ship-launched cruise missiles.[14]

But the deadliest terrorist attacks to date were the 9-11 Attacks when al-Qaeda hijacked four American airliners in a suicide mission, crashing two into the World Trade Center, one into the Pentagon, and the fourth crashing in rural Pennsylvania when the passengers attempted to take control of the plane. The attacks killed nearly 3,000 people. Shortly after these attacks US president George W. Bush declared a global war on terrorism in 2001. After 2001, terrorist attacks continued around the world, most notably the 2004 Madrid, Spain train bombings [15] and bombings in London, United Kingdom on one double-decker bus and three London Underground trains in 2005. [16]