Ireland (Irish: Éire; Ulster-Scots: Airlann) is an island lying off the north-west coast of Continental Europe with an area of 81,638 km².[1] It is divided politically into the sovereign state of Ireland (described in its constitution as the Republic of Ireland, by which name it is also known), which occupies approximately five-sixths of the island, and the British constituent country of Northern Ireland, which occupies the remaining sixth in the north-east of the island. 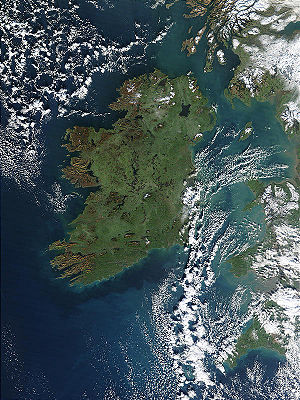 Satellite image of Ireland. The neighbouring island of Britain can be seen under cloud cover to the east.

Traditionally, the island of Ireland has been subdivided into four provinces and thirty-two counties. The provinces are: Leinster in the east, Munster in the south, Connacht in the west, and Ulster in the north. Of the thirty-two traditional counties, six (of nine Ulster counties) are within Northern Ireland, while the remaining twenty-six counties are in the Republic of Ireland. However, the traditional counties of Northern Ireland now only have ceremonial status, being replaced in 1974 by District Councils. Similarly, reform of local government in the Republic of Ireland has seen two counties further subdivided - Tipperary has been split into North and South Tipperary; and County Dublin has been split into the three new counties of Fingal, Dun Laoghaire-Rathdown and South Dublin. As five cities (Dublin, Cork, Galway, Limerick and Waterford) have independent council status, making them the equivalent of counties for local government purposes, this means that the Republic of Ireland now has thirty-four administrative areas.

However, despite these changes, the traditional thirty-two counties on the island still form an important part of heritage and local identity, and are still used in sporting and cultural contexts.

The coast of Ireland mostly consists of hills and low mountains (the highest point being Carrauntoohil at 1,041 m or 3,414 ft), with cliffs also being found on the west coast. The interior of the island is relatively flat land, traversed by rivers such as the River Shannon (the longest on the island, at 386 km) and several large lakes or loughs. The central plains of the island are part of the River Shannon watershed, containing large areas of bogland, used for peat extraction and production. 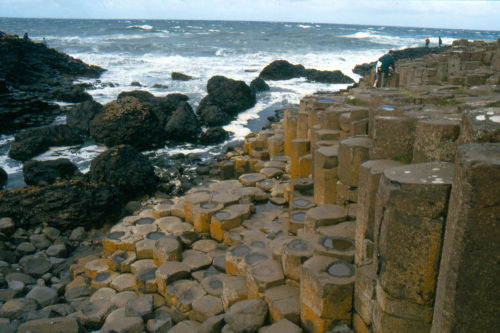 The Giant's Causeway is a scenic outcrop of basaltic lava flows in northeastern Ireland.

Recording and mapping of Ireland's bedrock geology began in the early 1800s. The first full geological map was produced in 1839, in preparation for the construction of Ireland's first railways. Work continued with the formation of the Geological Society of Ireland in 1845, and a one-inch scale (1:63,360) map of the whole island was completed in 1890.[2]

Most of the rocks of Ireland are relatively ancient (Paleozoic or older). In the north-west of the island (Counties Donegal and Londonderry), mostly metamorphic rocks such as schist, gneiss and quartzite are present. The north-east (Counties Antrim, Armagh and Down) is primarily basalt. The majority of the island's bedrock, however, is composed of limestones and sandstones of Paleozoic age.[3]

The local temperate climate is modified by the North Atlantic Current (or Gulf Stream) and is therefore relatively mild, enjoying fewer extremes than continental areas at similar latitudes. Summers are rarely very hot (temperatures only exceed 30ºC (86ºF) usually once every decade, though commonly reach 29ºC (84ºF) most summers. It freezes only occasionally in winter (temperatures below -6ºC (21ºF) are uncommon). Average annual temperature is about 9ºC. Precipitation is very common, with up to 275 days with rain in some parts of the country.

As a result of Ireland being split from mainland Europe sometime around the last Ice Age, the island lacks biodiversity. For example, there are only thirty-one species of mammal native to Ireland,[4] compared to sixty-six on Britain,[5] which lies closer to mainland Europe.

Similarly, only approximately nine hundred species of vascular plants (flowering plants, conifers and ferns) can be found, far smaller than the European average.[6][7]