Connacht (Irish Cúige Chonnacht), formerly more commonly spelled Connaught in English, is the one of the four provinces of Ireland, situated in the northern part of the west of the island, and is part of the Republic of Ireland. It consists of five counties, Galway, Leitrim, Mayo, Roscommon and Sligo. Its major urban centres are Galway and Sligo. It contains Gaeltacht (Irish-speaking) areas in County Mayo and County Galway.

The Irish name of the province, Cúige Chonnacht, means "province of the Connachta", a group of prehistoric and medieval dynasties who traced their ancestry to the legendary king Conn Cétchathach. The preferred English spelling is "Connacht". The spelling "Connaught", reflecting an earlier English orthographical practice of representing the voiceless velar fricative sound /x/, now lost in English, with the letters "gh", was officially used under British rule and is still found in print. 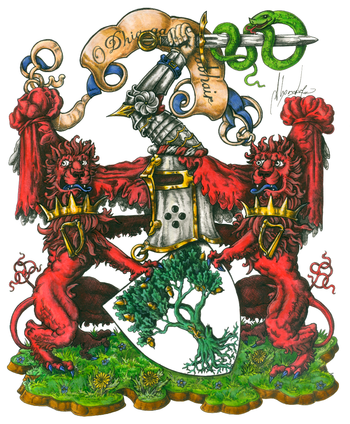 The O'Conor Don, coat of arms is pictured here, is Chief of the Name O'Conor and the most senior descendent of the Kings of Connacht and the last High King of Ireland. After losing their sovereignty, the O'Connor Dons have borne the titular title of Prince of Connacht.