See the tab above for Recipes of Tartiflette. 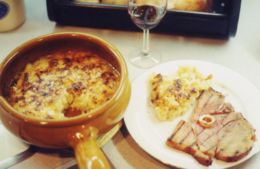 Tartiflette is a hearty cheese and potato dish from the mountainous Savoie region of eastern France, where it originated in the Aravis valley, the home of Reblochon cheese. It is not, however, a traditional dish and was, in fact, created and launched only in the 1980s by the Reblochon trade association in an attempt to increase sales of their cheese, which is made from ewe's milk. Different valleys in the area have different methods of making tartiflette and every household probably now has its own recipe. All of them, however, contain, at a minimum, potatoes, Reblochon cheese, and some kind of cured meat such as slab bacon or salt pork. Additional ingredients can be various permutations of butter, onions, local wine, and/or cream. Baked for about an hour before serving, tartiflettes generally have an attractive crispy, golden brown crust.

(CC) Photo: Hayford Peirce
A tartiflette with half a Reblochon on it before baking.

They have become popular at many alpine restaurants during the ski season because they are flavorful, nutritious, relatively easy to prepare in large quantities, and can be kept warm without noticeable deterioration in quality.

The word tartiflette is perhaps derived from the Piedmontese word for potato tartiflâ, although a number of other European languages have words for potato that are similar.