I have extensively rewritten the first two paragraphs and will continue to revise the rest of the article. Because of the amount of new material added, I have removed the checkbox for this article being Wikepedia material. If I have done so mistakenly, please reinstate the check. Thanks. Hayford Peirce 11:58, 6 June 2007 (CDT) 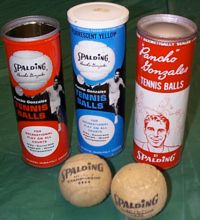 There is a plethora of interesting images available for this article; some may take a bit of leg work to get permission for. Here's one that was easy.  —Stephen Ewen (Talk) 22:22, 9 September 2007 (CDT)

In the archives of this talk page a Gonzales-Borg meeting was evoked.

I still remember watching the whole of the Gonzales v Pasarell match and being amazed that Gonzales won. Really good to read this. John Leach (talk) 23:22, 2 November 2018 (UTC)

Lucky you! Although the anguish building up must have been agonizing. Seven saved match points! *I*, unfortunately, had chosen to spend six months in London the year *before*. I remember reading about Sedge and Gorgo losing to AMATEURS in the first of the open tournies. Gorgo at least redeemed himself by beating Emerson, the defending champ, at Roland Garros, but then to MY anguish lost to Metraveli at Wimbledon. An incomprehensible defeat to me. I had rented a TV for a MONTH, just in order to watch Wimbledon. There was some fine tennis that year, but strange losses.... Hayford Peirce (talk) 23:49, 2 November 2018 (UTC)

I remember I was on study leave from school at the time while GCE exams were ongoing. I know I should have been revising but there was something of a buzz beforehand about that match and I decided to watch it. It went on for two days and I still think it is the greatest tennis match I ever saw, better than the Borg/McEnroe matches even. Gonzales was past his best by then (1969) but he must have been a tremendous player in his prime. I still rate Rod Laver as the best player I ever saw, ahead of Roger Federer, and I think Serena has been the greatest of the ladies. John Leach (talk) 10:03, 3 November 2018 (UTC)

I watched the famous Borg/Mac match in a rented house in S.F. back in the day. The tie-breaker was fantastic. I've seen a YouTube video of the last couple of games of the Gorgo/Pasarell match. I think that almost *everyone* considers the best player of all time to have been the top player of his own formative years. For me, that was Gorgo. And I still go with him. He won his last tournie when he was 44! Kramer thought Gorgo was better than Laver, but then he deprecated ALL of the great Aussies.... Hayford Peirce (talk) 23:47, 4 November 2018 (UTC)