I enjoyed reading the article, I added quite a few wikilinks. Some links I know do not exist yet, but I hope they will soon. I hope they are found acceptable, otherwise anyone may change or revert. Matt Mahlmann 21:03, 8 April 2007 (CDT)

For a really interesting take on Abraham Lincoln encyclopedia articles, go to http://chnm.gmu.edu/resources/essays/d/42 and use your browser to search for the words If the unpaid amateurs and then read the two paragraphs that follow. Stephen Ewen 01:46, 22 April 2007 (CDT)

Rosenzwig makes some good points. But Using a paid essay by a Pulitzer prize winner, who had a year to do it and professional editing help, as the standard is a bar too high, which no reference work can remotely approach. Richard Jensen 15:48, 22 April 2007 (CDT)

Reading through this article, it seems to me that some of the language presents neutrality issues, particularly in the intro. Here are the points I noticed specifically:

In response to Nat Krause.

The article fails to tell these negative impacts Lincoln left on history. While I wholeheartedly respect Professor Jensen and believe his knowledge of history is trillions of times better than mine, I'd still like to point them out:

Also, there were even abolitionists supporting the confederacy, such as Lysander Spooner.

These are not, in my view "negative impacts," but rather interpretative claims *within* a certain political viewpoint of the ultimate consequence of some of Lincoln's actions. That slavery would have been abolished anyway seems to me a specious (as well as unprovable) claim. Unless Yi Zhe Wu can document that such arguments have been made by specific historians, preferably historians without a partisan political agenda, I do not think these are worthy of mention as such in the Lincoln entry. It may well be appropriate, however, to reference such claims (again, if they can be documented) in entries on the relevant issues such as Federalism or "States' rights". ...said Russell Potter (talk) (Please sign your talk page posts by simply adding four tildes, ~~~~.)

States rights--the states are doing just fine and are much stronger in 29007 than they were in 1859. Corporations are indeed part of modernity. The term "Robber Barons" is an artful combination of crime (robbers) and aristocracy (barons) and in not an analyticval term. for the real opponents look at the Copperheads article. Richard Jensen 12:19, 7 May 2007 (CDT)

I agree corporations would probably come to rise without civil war. However, I'd dispute about the states' rights assertion. The recent court decision Raich says the federal government may prohibit the cultivation of marijuana even if states allow it---in Justice Thomas' word, it would be "unthinkable in the early days of the republic". The "robber baron" is an artful combination, yes, however, in reality, people like J. D. Rockefeller did benefit from post-war federal government policies. The copperheads, yes, Lincoln slaughtered them without trial. From the Copperheads article, "The sentiments of Copperheads attracted Southerners who had settled north of the Ohio River, social conservatives, poor subsistence farmers, and foes of railroads, banks and monopolies." This line correctly reflects that during the civil war the poor and the disadvantaged did not like Lincoln at all, and Lincoln did indeed favor the rich. Yi Zhe Wu 15:25, 7 May 2007 (CDT)

Despite my comments opposing the claimed "negative" impact of certain of Lincoln's policies above, I do think the tone of this entry needs work. Adjectives abound such as "remarkable" and "brilliant" which seem both needless and, potentially, a problem in terms of our Neutrality policy. However much we may admire Lincoln, better to let the facts speak for themselves. Also, it might be noted somewhere that Lincoln's political opponents saw him as a backwoods buffoon who could not resist quoting from "Joe Miller's Jests" -- this would be relevant and perhaps useful in setting him in his context, rather than enshrined as a "great man" who could do no wrong. Russell Potter 20:46, 6 May 2007 (CDT)

Not to contradict you, Russell--you might be right in this case (I won't take a position). But as a general point, unless there are many familiar with Lincoln who disagree with certain epithets, then they are not in conflict with Neutrality Policy. It isn't biased in itself to say, for example, that Shakespeare is regarded as one of the most brilliant writers in English language: that's a fact. --Larry Sanger 22:59, 6 May 2007 (CDT)

I want to play devil's advocate for a minute and what if by some incredible chance it's discovered that Bill Shakes wasn't the original author of a few of his works? Then that would be contentious; and it would be foolish to say that he was brilliant. Is, for the sake of the context, brilliant a subjective term? --Robert W King 13:19, 7 May 2007 (CDT)

Agreed! I'm an enormous admirer of Lincoln, but I do feel a bit put upon as a reader when the frosting of adjectives outweighs the cake of achievements. You're right, though, it's not a neutrality issue, more a style issue; a little "regarded as" would do the trick. Russell Potter 23:03, 6 May 2007 (CDT)

the article's language reflects the consensus of experts, who have a very high admiration indeed of Lincoln, especially his use of politics, morality and language. CZ needs to let readers know that. Note the article explictly says Lincoln was wrong or mistaken about several major issues, again reflecting the consensus of scholars. Richard Jensen 00:36, 8 May 2007 (CDT)

I think an article about Lincoln may need an image of him. However, there are way too many portraits of Lincoln. Some editor/experts please help to choose the best one to represent him. Yi Zhe Wu 19:25, 19 May 2007 (CDT)

I suggest the following image which has been made available for fair use with credit line to the Chicago Historical Society. 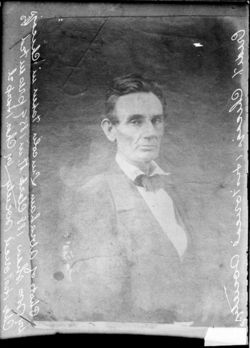 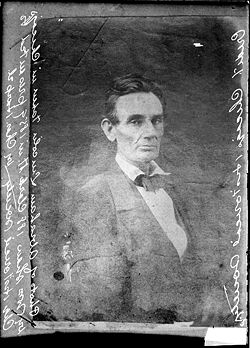 I was never particularly happy with the photograph so I took it into paint.net to see if I could improve upon it; I added a gradient transparent adjustment layer and adjusted the contrast. Any comments? --Robert W King 22:55, 22 October 2007 (CDT)

It's likely that the original would be PD, but since the digital image is (presumably) a copy made by the Chicago Historical Society, the digital embodiment is being used under their fair use guidelines, just to be safe. Russell Potter 21:33, 21 May 2007 (CDT)

Okay, another doubt I have is about the CZ policy that fair use pictures should only be used when free ones aren't available. I don't know if official U.S. white house pic would be better or not. What's your opinion? Yi Zhe Wu 21:35, 21 May 2007 (CDT)

I'll have to double check, but I don't think that CZ policy is not to use a better image available under a fairly clear grant of fair use, or with permission, over PD image that is of less value. I prefer this one, myself. Russell Potter 21:44, 21 May 2007 (CDT)

CZ should stick to the policy that all pictures pre 1923 are public domain. that is the law and we might as well use it as policy. Hypothetical speculation that some day the law will change is irrelevant. At present digitizng a pre-1923 image does NOT confer copyright status in any court anywhere and no one pretends otherwise. Richard Jensen 01:26, 22 May 2007 (CDT)

absent any requirement by CZ lawyers the article should not be making any legal claims. We did NOT seek or get any permission from Chicago Hist Society--(of which I am a life member). Richard Jensen 01:40, 22 May 2007 (CDT)

Richard, I understand your concerns here - but as the image's upload history shows, I'm just plugging in boilerplate language that CHS suggests as a credit line for any of their images -- "courtesy of" does not imply that we sought or received permission of any kind, I hope. I am absolutely in agreement with you that this image *ought* to be entirely in the public domain, but I'm not so sure that this means it is -- or that just ignoring the CHS's request for a credit line will somehow protect us. Since you're a life member, maybe you can persuade them to change their outlook on this  :-> Russell Potter 09:08, 22 May 2007 (CDT)

Doesn't "courtesy of" imply the provision of something and not the endorsement or credit of the item in question? If someone takes a picture of a statue and provides it to me, wouldn't it be "courtesy of" that individual?--Robert W King 13:14, 22 May 2007 (CDT)