From Citizendium
< Shirley Chisholm
Jump to navigation Jump to search 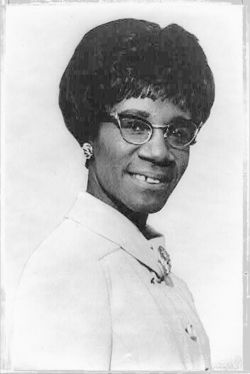 Shirley Anita Chisholm (1924-2005) was an American political figure who served in the House of Representatives from 1969 to 1983, representing New York's 12th Congressional District. She was the first African-American woman to serve as a congressional representative in the United States. Chisholm was a member of the Democratic Party. She unsuccessfully ran for the Democratic nomination for presidency in 1972. During her colorful and controversial career, Chisholm was renowned for her political liberalism and her advocacy of rights and equality for the underprivileged people, such as African-Americans, the poverty-stricken, and women.

Shirley Chisholm was born in 1924 in Brooklyn, New York. She obtained early education in Barbados, her parents' homeland, and later attended New York public schools.[1] She obtained her bachelor's degree at Brooklyn College, and, a master's degree at Columbia University in elementary education. She taught at a nursery school and later became the director of Hamilton-Madison Child Care Center in New York City. During her career in education she advocated for decentralization of policies on schools. She served in the New York state legislature from 1964 until her election to the U.S. Congress in 1968.

James Farmer, a civil rights activist who ran against Chisholm in the election

Chisholm ran for Congress in 1968 on the Democratic ticket with the slogan "unbought and unbossed". Her opponent from the Republican Party was James L. Farmer, the famous civil rights leader and founder of Congress of Racial Equality. Despite that Farmer had the endorsement of Governor Nelson Rockefeller,[2] Chisholm won the election and was re-elected six times. Her election was significant not only because it was the first time an African-American woman to be elected to Congress, but her campaign was noted for targeting the female constituency.[3]

In Congress, she was known for her outspokenness and uncompromising style. She focused on issues such as poverty, civil rights, and women's rights. When the Congressional Black Caucus was founded in 1969, she was one of the founding members.[4] In 1970, she authored a child care bill. The bill passed the House and the Senate, but was vetoed by President Richard Nixon, who called it "the Sovietization of American children".[5] She supported the Equal Rights Amendment and legalized abortion.[6]

In the area of national security and foreign policy, Chisholm worked for the revocation of Internal Security Act of 1950.[7] She opposed the American involvement in the Vietnam War and the expansion of weapon developments. During the Jimmy Carter administration, she called for better treatment of Haitian refugees.[8]

She entered the bid for Democratic nomination for presidency in 1972 election, becoming the first African-American woman to run for president. However, she only obtained 152 votes from the delegates in the Democratic convention and the nomination was won by George McGovern, a Senator from South Dakota, who went to lose in the general election to then-President Richard Nixon. Even herself admitted that her presidential bid was only for symbolic reasons.[9]

In his presidential campaign, she highlighted her efforts in Congress to introduce day care legislations, to establish a minimum annual income for families, to bring back the troops from Vietnam, and her record against installation of missiles such as MIRV (multiple independently-targeted reentry vehicles) and ABM (antiballistic missile). In the campaign brochure she promised reforms and styled her presidential bid as a "dynamic force for responsible change".[10] She also denounced the influence of special interests in American politics.[11]

During her 1972 campaign she surprised the nation by visiting the famous segregationist governor of Alabama and presidential candidate George Wallace in the hospital after he survived an assassination attempt. In return, Wallace helped to convince Southerners to support the extension of federal minimum wages.[12]

Later life, death and beyond 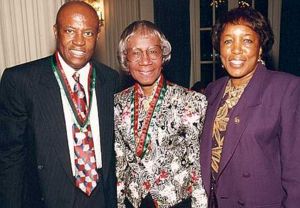 Chisholm (middle) with Congressman Edolphus Towns and his wife

Chisholm did not run for re-election in 1982, and retired from Congress. After retirement she resumed her career in education, teaching politics and women's studies at Mount Holyoke College from 1983 to 1987. In 1985 she was a visiting scholar at Spelman College. In 1984 and 1988, she campaigned for Jesse Jackson for the presidential elections. In 1993, then-President Bill Clinton nominated her to the ambassadorship to Jamaica, but she could not serve due to poor health. In the same year she was inducted into the National Women's Hall of Fame.[13] Chisholm died in Florida in 2005.

She had married twice in her life. Her first husband, Conrad Q. Chisholm, a Jamaican private investigator, whom she married in 1949, divorced her in 1977.[14] She married Arthur Hardwick, Jr. in 1978. Hardwick died in 1986. During her lifetime Chisholm did not have any children.[4]

Barbara Lee, an African-American woman who was involved in Chisholm's presidential campaign in northern California, later also became a member of the House of Representatives.[16]