Sheffield is a city in south-west Yorkshire, United Kingdom. The city was originally built around the steel industry, but this declined during the 1980s. Like most British cities, Sheffield underwent considerable expansion during the 1960s, involving the construction of a number of high-rise developments. 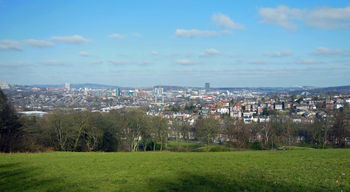 The factors which made Sheffield an ideal location for a centre of the cutlery industry were the presence of iron ore, woodlands for making charcoal, and sandstone, used for making grindstones, combined with the water power from five steeply flowing rivers. By the time Geoffrey Chaucer wrote The Canterbury Tales, its reputation was sufficiently established for the Reeve's Tale to have its central character (a miller) bearing a "Sheffeld thwitel" (large knife). The industry as it initially developed was carried on by individual craftsmen, "little mesters", who worked independently but co-operatively at separate crafts, from forging, through grinding and finishing to setting the handles. Grinding in particular, though well paid, was hazardous, as grinding stones with a hidden flaw could explode, and the metal and stone particles generated by the grinding usually damaged the lungs.

Sheffield is situated directly adjacent to the M1 motorway. It has a large station on the Midland Main line with direct services to London St. Pancras. The city also has a light rapid transit system, named the Sheffield Supertram, which opened in 1994. Sheffield was also the terminus of the Woodhead Route, a formerly electrified main line railway which closed in 1981.

The city was the setting of the 1997 film The Full Monty.