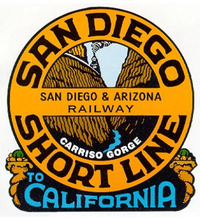 The San Diego and Arizona Railway (AAR reporting mark SDA) was a short line, standard gauge American railroad founded by "sugar heir," developer, and entrepreneur John D. Spreckels, and dubbed "The Impossible Railroad" by many engineers of its day due to the immense logistical challenges involved. Established in part to provide the City of San Diego, California with a direct transcontinental rail link to the east by connecting with the Southern Pacific Railroad (which secretly provided the funding for the endeavor) lines in El Centro, the 146-mile (236-kilometer) route of the SD&A originated in San Diego, and terminated in the Imperial County town of Calexico. The company charter was executed on December 14, 1906 and the groundbreaking ceremony was held on the following September. Numerous delays (including government intervention during World War I) delayed the completion of the line to November 15, 1919. Completing the SD&A was a monumental task that seriously affected Spreckels' health, and in the end nearly cost him his life. Damage to the lines from both natural disasters and sabotage exerted great financial pressure on the company, and in 1932 Spreckels' heirs sold their interests in the railroad (which was thereafter named the San Diego and Arizona Eastern Railway) to the Southern Pacific.

The company was chartered on December 14, 1906 with John D. Spreckels as chairman.[1] Southern Pacific Railroad (SP) president Edward H. Harriman agreed to surreptitiously provide financial backing for the effort as part of that company's bid to establish a direct link between San Diego, California and the Eastern United States (in order to compete with the Atchison, Topeka and Santa Fe Railway's "Surf Line" route which had located its western terminus in National City).[2] When Harriman unexpectedly passed away on September 9, 1909 the SP's "era of expansion" came to an end, and funding for the SD&A abruptly ceased.[3][4] Groundbreaking ceremonies were held at the intersection of San Diego's Main and 18th Streets on September 7, 1907.[5] Spreckels raised the additional money required to complete the railroad on is own. Construction delays, attacks by Mexican revolutionaries, and government intervention during World War I all served to push the construction completion to November 15, 1919 when the "golden spike" was finally driven near Jacumba by none other than Spreckels himself.[6] The first through SD&A passenger train left San Diego on the morning of December 30, and made the full run from El Centro to San Diego's downtown Union Station for the official opening of the line the next day, December 1, 1919.[7] The total construction cost of the 146.4 miles (235.6 kilometers) of track laid was approximately $18 million, or roughly $123,000 per mile ($76,500 per kilometer); the original estimate was $6 million. The 11-mile (18-kilometer) long segment through Carriso Gorge [8] (which included 13,385 feet (4,080 meters) of tunnels, 17 in all) alone cost over $4 million to construct; the 3 miles (5 kilometers) of tunnels (21 total) along the entire line ran another $1.8 million. Almost 2½ miles (4 kilometers) of bridges and trestles were built as well. The tracks departed downtown San Diego south where they crossed the U.S.—Mexico border at San Ysidro. From there the line traversed eastward through Tijuana, then headed northeast through Tecate and back over the border to the town of Campo. 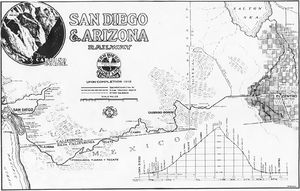 To construct and maintain the 44-mile (72-kilometer) stretch through Mexico the SD&A formed the Ferrocarril Tijuana y Tecate, S.A. de C.V. (Tijuana and Tecate Railway Company), at the behest of the Mexican government. East of Campo the road traveled through Clover Flats, across the Coast Range (elevation 3,660 feet), then descended through the breathtaking but treacherous Carriso Gorge, the builders' most significant obstacle. Though the SD&A line ended in Seeley, trackage rights gave the railroad the ability to run trains as far east as El Centro and as far south as Calexico. Branch lines ran from downtown to as far north and east as the community of Lakeside, with a separate line which circumvented San Diego Bay to service Coronado Heights, Coronado, and North Island. The line provided both passenger and freight service for several decades. Long distance passengers on the SD&A were required to pass through two border check points, and were often subjected to severe dust and heat over much of the route.[9] Damage to the lines from heavy rainstorms, landslides, and fires took a financial toll on the railroad, as did border closings with Mexico. Clashes with the Industrial Workers of the World (IWW) resulted in acts of vandalism as well. In 1932, financial difficulties forced Spreckels' heirs to sell their interests in the firm for $2.8 million to the Southern Pacific, which renamed the line the San Diego and Arizona Eastern Railway (SD&AE). 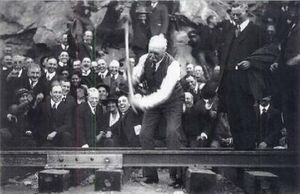 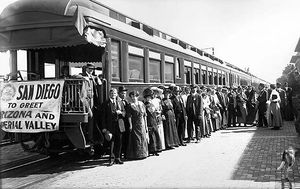 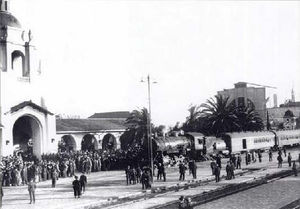