The San Diego Electric Railway (AAR reporting mark SDER) was a standard gauge American electrified railway system founded by "sugar heir," developer, and entrepreneur John D. Spreckels in 1891 in order to provide mass transit services to the City of San Diego and its surrounding communities. Spreckels acquired all of the existing competing rail-based transit services (including horse-drawn, steam-driven, gasoline-powered, and cable car systems) and consolidated and expanded the lines into a unified network utilizing electric street cars. The railroad's original network consisted of five routes; at its peak in 1925 the system was comprised of sixteen separate routes. The company also engaged in limited freight handling from 1923 to 1929, primarily as an interchange with Spreckels' San Diego and Arizona Railway (SD&A). At its peak, the SDER's routes operated throughout the greater San Diego area over some 165 miles (266 kilometers) of track. Steadily-declining ridership (due in large part to the phenomenal rise in popularity of the automobile) ultimately led the company to discontinue all streetcar service in 1949, making San Diego the first major Southwestern city to convert to an all-bus transit system. 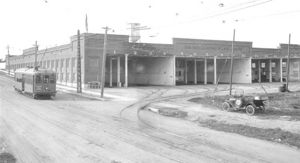 (PD) Photo: Unknown
The streetcar barn in Mission Cliff Gardens, circa 1915. Constructed in 1913 to house surplus streetcars, the brick structure remained in existence until it was demolished in 1980.[1]

So I set to work to develop...a street railway system which would reach out to even the outlying section of the city.[2]

Before you can hope to get people to live anywhere...you must first of all show them that they can get there quickly, comfortably, and above all, cheaply. Transportation determines the flow of population.[3]

The company established additional operating divisions in response to increased traffic demands that led to the formation of new lines. 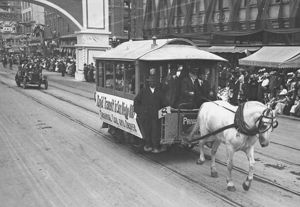 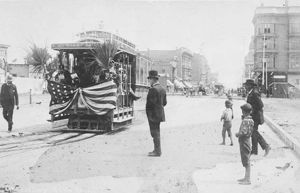 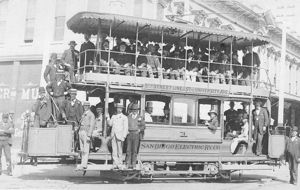 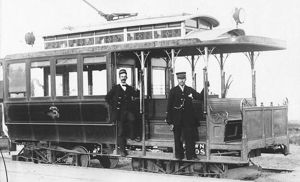 (PD) Photo: R.C. Brandt
Car #6 on the University Heights / Mission Cliff Gardens Line, a cable car that has been converted to electric traction.[6] 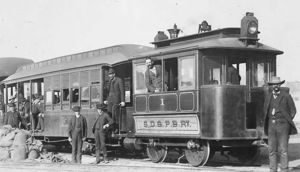 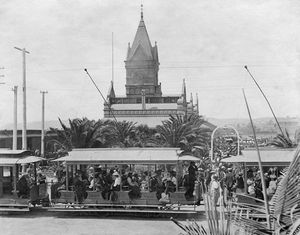 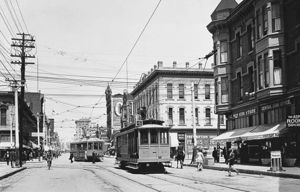 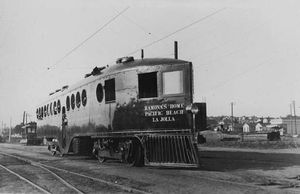 (PD) Photo: A.E. Barker collection
A gasoline-powered motorcar on the Los Angeles & San Diego Beach Railway (LASDBR) en route to Ramona's Home, Pacific Beach, and La Jolla, one of three such units that would eventually be acquired by the SDERy, circa 1907.[10][11][12] 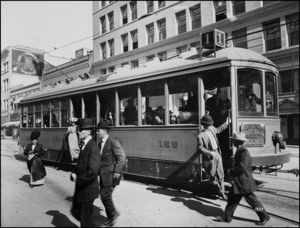 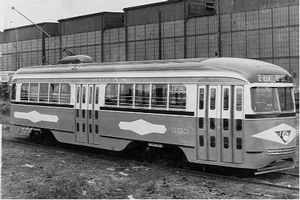