In mathematics and physics a rotation matrix is synonymous with a 3×3 orthogonal matrix, which is a matrix R satisfying

where T stands for the transposed matrix and R−1 is the inverse of R.

Connection of an orthogonal matrix to a rotation

In general a motion of a rigid body (which is equivalent to an angle and distance preserving transformation of affine space) can be described as a translation of the body followed by a rotation. By a translation all points of the space are displaced, while under a rotation at least one point stays in place. Let the the fixed point be O. By Euler's theorem follows that then not only the point is fixed but also an axis—the rotation axis— through the fixed point. Write

for the unit vector along the rotation axis and φ for the angle over which the body is rotated, then the rotation operator on

along the axes, then the 3×3 rotation matrix

is defined by its elements

In a more condensed notation this equation can be written as

Given a basis of a linear space, the association between a linear map and its matrix is one-to-one.

(for convenience sake the rotation axis and angle are suppressed in the notation) leaves all angles and distances invariant, for any pair of vectors

the inner product is invariant, that is,

A linear map with this property is called orthogonal. It is easily shown that a similar vector-matrix relation holds. First we define column vectors (stacked triplets of real numbers given in bold face):

The invariance of the inner product under the rotation operator

where E is the 3×3 identity matrix. For finite-dimensional matrices one shows easily

A matrix with this property is called orthogonal. So, a rotation gives rise to a unique orthogonal matrix.

Conversely, consider an arbitrary point P in the body and let the vector

is represented by column vector p′ with respect to the same Cartesian frame). If we map all points P of the body by the same matrix R in this manner, we have rotated the body. Thus, an orthogonal matrix leads to a unique rotation. Note that the Cartesian frame is fixed here and that points of the body are rotated, this is known as an active rotation. Instead, the rigid body could have been left invariant and the Cartesian frame could have been rotated, this also leads to new column vectors of the form p′ ≡ Rp, such rotations are called passive.

Properties of an orthogonal matrix

Writing out matrix products it follows that both the rows and the columns of the matrix are orthonormal (normalized and orthogonal). Indeed,

where δij is the Kronecker delta.

A compact way of presenting the same results is the following. Designate the columns of R by r1, r2, r3, i.e.,

The matrix R is orthogonal if

The matrix R is a proper rotation matrix, if it is orthogonal and if r1, r2, r3 form a right-handed set, i.e.,

Here the symbol × indicates a cross product and

is the antisymmetric Levi-Civita symbol,

if two or more indices are equal.

The matrix R is an improper rotation matrix if its column vectors form a left-handed set, i.e.,

The last two equations can be condensed into one equation

It was just shown that for a proper rotation the columns of R are orthonormal and satisfy,

Likewise the determinant is −1 for an improper rotation. 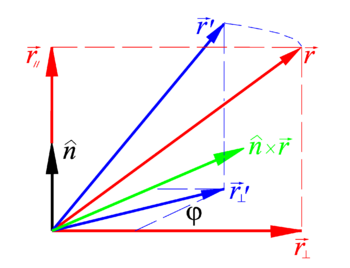 over an angle φ. The red vectors are in the plane of drawing spanned by

. The blue vectors are rotated, the green cross product points away from the reader and is perpendicular to the plane of drawing.

be a vector pointing from the fixed point O of a rigid body to an arbitrary point P of the body. A rotation of this arbitrary vector around the unit vector

over an angle φ can be written as

where • indicates an inner product and the symbol × a cross product.

It is easy to derive this result. Indeed, decompose the vector to be rotated into two components, one along the rotation axis and one perpendicular to it (see the figure on the right)

the rotation property simply is

Some reshuffling of the terms gives the required result.

It will be shown that

Note further that the dyadic product satisfies (as can be shown by squaring N),

which gives the desired result for the rotation matrix. This equation is identical to Eq. (2.6) of Biedenharn and Louck[1], who give credit to Leonhard Euler (ca. 1770) for this result.

which sometimes[2] is referred to as reflection over a line, although it is not a reflection.

Equation (1) is a special case of the transformation properties given on p. 7 of the classical work (first edition 1904) of Whittaker[3]. To see the correspondence with Whittaker's formula, which includes also a translation over a displacement d and who rotates the vector (x−a, y−b, z−c), we must put equal to zero: a, b, c, and d in Whittaker's equation. Furthermore Whittaker uses that the components of the unit vector n are the direction cosines of the rotation axis:

Under these conditions the rotation becomes

Sometimes it is necessary to rotate a rigid body so that a given vector in the body (for instance an oriented chemical bond in a molecule) is lined-up with an external vector (for instance a vector along a coordinate axis).

Let the vector in the body be f (the "from" vector) and the vector to which f must be rotated be t (the "to" vector). Let both vectors be unit vectors (have length 1). From the definition of the inner product and the cross product follows that

where φ is the angle (< 180°) between the two vectors. Since the cross product f × t is a vector perpendicular to the plane of both vectors, it is easily seen that a rotation around the cross product vector over an angle φ moves f to t.

is a unit vector. Define accordingly

can be computed easily and quickly. It requires not much more than the computation of the inner and cross product of f and t.

Case that "from" and "to" vectors are anti-parallel

Clearly, a two-fold rotation (angle 180°) around any rotation axis perpendicular to f will map f onto −f. This freedom in choice of the two-fold axis is consistent with the indeterminacy in the equation that occurs for cosφ = −1.

Recall that f is a unit vector. If f is on the z-axis, |fz| = 1, then the following rotation around the y-axis turns f into −f:

If f is not on the z-axis, fz ≠ 1, then the following orthogonal matrix sends f to −f and hence gives a 180° rotation of the rigid body

To show this we insert

into the expression for rotation over 180° introduced earlier:

Note that the vector

is normalized, because f is normalized, and that it lies in the x-y plane normal to the plane spanned by the z-axis and f; it is in fact a unit vector along a rotated y-axis obtained by rotation around the z-axis.

is easily and quickly calculated. The matrix rotates the body over 180° sending f to −f exactly. When −f and t are close, but not exactly equal, the earlier rotation formula Eq. (2), may be used to perform the final (small) rotation of the body that lets −f and t coincide exactly.

Euler's theorem states that a rotation is characterized by a unique axis (an eigenvector with unit eigenvalue) and a unique angle. As a corollary of the theorem follows that the trace of a rotation matrix is equal to

and hence the trace depends only on the rotation angle and is independent of the axis. Let A be an orthogonal 3×3 matrix (not equal to E), then, because cyclic permutation of matrices under the trace is allowed (i.e., leaves the trace invariant),

As a consequence it follows that the two matrices

describe a rotation over the same angle φ but around different axes. The eigenvalue equation can be transformed