The 2-dimensional plane, well-known from elementary Euclidean geometry, is an example of an affine space. Remember that in elementary geometry none of the points in the plane is special—there is no origin. A real n-dimensional affine space is distinguished from the vector space

by having no special point, no fixed origin.[1]

From elementary geometry we know that any two points in a plane (a collection of infinitely many points) can be connected by a line segment. If the points P and Q in a plane are ordered with P before Q, the line segment connecting the two becomes an arrow pointing from P to Q. This arrow can be mapped onto a vector, the difference vector, denoted by

In elementary analytic geometry, the map of arrows onto vectors is almost always defined by the choice of an origin O, which is a point somewhere in the plane. Clearly, an arbitrary point P is the head of an arrow with tail in the origin and corresponding with the unique difference vector

. All arrows with tail in O are mapped one-to-one onto a 2-dimensional difference space V2, with the vector addition in V2 in one-to-one correspondence with the parallelogram rule for the addition of arrows in the plane.

Usually one equips the difference space with an inner product, turning it into an inner product space. Its elements have well-defined length, namely, the square root of the inner product of the vector with itself. The distance between any two points P and Q may now be defined as the length of

in V2. A two-dimensional affine space, with this distance defined between the points, is the Euclidean plane known from high-school geometry.

We will restrict the definition to vector spaces over the field

Let V be an n-dimensional vector space and A a set of elements that we will call points. Assume that a relation between points and vectors is defined in the following way:

If these three postulates hold, the set A is an n-dimensional affine space with difference space V.

Two immediate and important consequences are:

Proof:   If the points coincide,

, we just saw that the difference vector is the zero vector. Conversely, assume that

. Then for an arbitrary point

which implies that the same vector in V connects

in A with two different points, which by postulate 2 is forbidden. 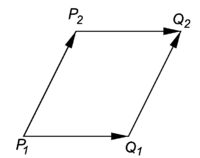 CC Image
The parallelogram law in the 2-dimensional Euclidean plane.

Consider four points in A:   P1, P2, Q1, and Q2. Assume that the following difference vectors are equal,

then we may exchange Q1 and P2,

See the figure for a concrete example in which the four points form a parallelogram.

Choose a fixed point O in the affine space A, an origin. Every point P is uniquely determined by the vector

. Indeed, suppose that there is another point Q such that

Choice of another origin O ′ gives a translation of

the position vector of P with respect to O ′.

consists of an origin O in A and a basis

The numbers xi (i = 1, ..., n) are the affine coordinates of P with respect to the given coordinate system. Note that O has the coordinates xi = 0.

The matrix (Ai j) transforms the one basis of V into the other, hence it is a square regular (invertible) matrix. The real numbers ti are the affine coordinates of O′ relative to

Express a fixed point P with respect to

Insert into the second equation

so that the transformation from the one affine coordinate system to the other is,

Let P → P′ be a mapping of the affine space A into itself; if the map satisfies the following two conditions, it is an affine map.

(ii) The map is linear in the difference space. That is, the map φ: V → V defined by

is linear.[3] A translation is an affine map with φ the identity operation,

Here the origin and the image are parallel.

Given two points O and O′ and a linear map φ: V → V. There exists exactly one affine map that sends O into O′ and induces φ on V. This is the map

by the parallelogram law (see above), the map φ may also be defined as

from which follows the matrix-vector expression for an affine map,

Often[4] one writes the last expression for an affine map with the aid of a square (n+1) × (n+1) matrix that contains F on the diagonal and that is augmented with the translation vector t and the number 1,

Let A be an affine space with difference space V on which a positive-definite inner product is defined. Then A is called a Euclidean space. The distance between two point P and Q is defined by the length ,

where the expression between round brackets indicates the inner product of the vector with itself. It follows from the properties of the real inner product that the distance has the usual properties,

A rigid motion of a Euclidean space is an affine map which preserves distances. The linear map φ on V is then a rotation. Conversely, given a rotation φ and two points P and P′ then there exists exactly one rigid motion which sends P into P′ and induces φ on V.