See Taiwan for the Republic of China since 1949

The Republic of China administered mainland China from 1912, replacing the Qing Dynasty and its emperor with a republic. In 1949, following the rise of communism in China, the government was forced to withdraw to Taiwan and its surrounding islands during the Chinese Civil War. For many years, it was recognised as the sole legitimate government of China, but today that international recognition goes to the People's Republic of China on the mainland. 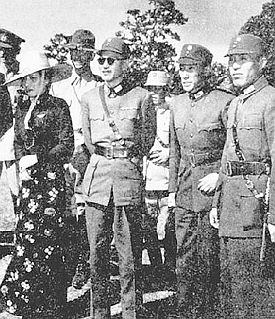 Chiang Kai-shek (in sunglasses) led the Republic of China from 1927.
Photo: public domain

1911 saw the overthrow of the Qing government in the Wuchang Uprising on 11th October. A new government under Dr Sun Yat-sen came to power on 1st January 1912, but the ruling Kuomintang party (KMT) was dissolved by President Yuan Shikai in 1915, who declared himself emperor and triggered years of unrest. Sun returned from exile in 1919 and re-established the KMT following Yuan's death in 1916; it was over a decade before central control was wrestled from regional warlords. After the Russian Revolution, communism had gained a foothold in China, and KMT leader Chiang Kai-shek's subsequent purges of communists and left-wingers brought about the Chinese Civil War. Chiang ordered mass executions in April 1927, and established a capital at Nanjing that year. Stability was interrupted, however, by the Japanese invasion of Manchuria; this territory returned to the ROC after the defeat of Japan at the end of World War II in 1945. The state was also given control of formally Japanese-occupied Taiwan, a much-opposed decision among islanders backing independence.

The Chinese Civil War resumed in the late 1940s, and by the end of the decade the Communists controlled the mainland. Chiang's Nationalist government withdrew to Taiwan with about two million refugees, but there was no 'last stand'; the presence of the U.S. 7th fleet in the region meant that hostilities were suspended, thugh no peace treaty was signed.