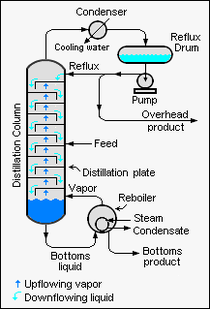 A liquid mixture containing many components is called a multi-component mixture. When a multi-component mixture is is distilled, the overhead fraction and the bottoms fraction typically contain much more than one or two components. For example, some intermediate products in a petroleum refinery are multi-component liquid mixtures that may contain the alkane, alkene and alkyne hydrocarbons ranging from methane having one carbon atom to decanes having ten carbon atoms. For distilling such a mixture, the distillation column may be designed (for example) to produce:

The diagram below is based on the vapor-liquid equilibrium of a hypothetical binary liquid mixture and illustrates how an increase in either the pressure or temperature decreases the relative volatility of the mixture. 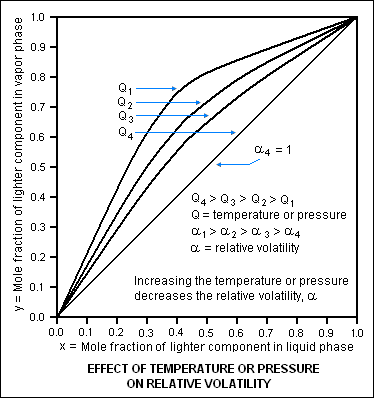