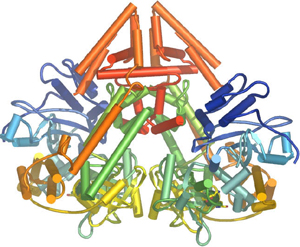 Schematic showing the fold of the QDE-1 RNA interference polymerase. The dimeric molecule is shown with the polypeptide chains colored from blue at the N termini to red at the C termini. From: RNA Silencing Sheds Light on the RNA World Jones R PLoS Biology Vol. 4, No. 12, e448 doi:10.1371/journal.pbio.0040448

The RNA world hypothesis proposes that RNA was the first life-form on earth, later developing a cell membrane around it and becoming the first prokaryotic cell.

The RNA World hypothesis is supported by the RNA's ability to store, transmit, and duplicate genetic information, just like DNA does. RNA can also act as a ribozyme (an enzyme made of ribonucleic acid). Because it can reproduce on its own, performing the tasks of both DNA and proteins (enzymes), RNA is believed to have once been capable of independent life. Further, while nucleotides were not found in Miller-Urey's experiments, they were found by others' simulations, notably those of Joan Oro. Experiments with basic ribozymes, like the viral RNA Q-beta, have shown that simple self-replicating RNA structures can withstand even strong selective pressures (e.g., opposite-chirality chain terminators) (The Basics of Selection (London: Springer, 1997)).

The phrase "RNA World" was first used by Walter Gilbert in 1986. However, the idea of independent RNA life is older and can be found in Carl Woese's book The Genetic Code (New York: Harper and Row, 1967). Five years earlier, the molecular biologist Alexander Rich, of the Massachusetts Institute of Technology, had posited much the same idea in an article he contributed to a volume issued in honor of Nobel-laureate physiologist Albert Szent-Györgyi.

RNA and DNA are made of long stretches of specific nucleotides, often called "bases", attached to a sugar-phosphate backbone. The RNA world hypothesis holds that in the primordial soup / primordial sandwich there existed free-floating nucleotides. These nucleotides regularly formed bonds with one another which often broke because the change in energy was so low. However, certain sequences of base pairs have catalytic properties that lower the energy of their chain being created, causing them to stay together for longer periods of time. As each chain grew longer it attracted more matching nucleotides faster, causing chains to now form faster than they were breaking down.

These chains are proposed as the first, primitive forms of life. In an RNA world, different forms of RNA compete with each other for free nucleotides and are subject to natural selection. The most efficient molecules of RNA, the ones able to efficiently catalyze their own reproduction, survived and evolved, forming modern RNA.

Competition between RNA may have favored the emergence of cooperation between different RNA chains, opening the way for the formation of the first proto-cell. Eventually, RNA chains randomly developed with catalytic properties that help amino acids bind together (peptide-bonding). These amino acids could then assist with RNA synthesis, giving those RNA chains that could serve as ribozymes the selective advantage. Eventually DNA, lipids, carbohydrates, and all sorts of other chemicals were recruited into life. This led to the first prokaryotic cells, and eventually to life as we know it.

At first glance, the RNA world hypothesis seems implausible because, in today's world, large RNA molecules are inherently fragile and can easily be broken down into their constituent nucleotides through hydrolysis. The aromatic bases comprising RNA also absorb strongly in the ultraviolet region, and would have been liable to damage and breakdown by background radiation. (Pääbo 1993, Lindahl 1993).

Carl Zimmer has been working on a controversial hypothesis that viruses were instrumental in the transition from RNA to DNA and the evolution of Bacteria, Archaea, and Eukarya. He believes the last common ancestor was RNA-based and evolved RNA viruses. Some of the viruses evolved into DNA viruses to protect their genes from attack. Through the process of viral infection into hosts the three domains of life evolved. [1]

A proposed alternative to RNA in an "RNA World" is the peptide nucleic acid, PNA. PNA is more stable than RNA and appears to be more readily synthesised in prebiotic conditions, especially where the synthesis of ribose and adding phosphate groups are problematic. Threose nucleic acid (TNA) has also been proposed as a starting point, as has Glycol nucleic acid GNA.

A different alternative to the assembly of RNA is proposed in the PAH world hypothesis.

Additionally, in the past a given RNA molecule might have survived longer than it can today. Ultraviolet light can cause RNA to polymerize while at the same time breaking down other types of organic molecules that could have the potential of catalyzing the break down of RNA (ribonucleases), suggesting that RNA may have been a relatively common substance on early Earth. This aspect of the theory is still untested and is based on a constant concentration of sugar-phosphate molecules.

The RNA world hypothesis, if true, has important implications for the very definition of life. For the majority of the time following the elucidation of the structure of DNA by Watson and Crick, life was considered as being largely defined in terms of DNA and proteins: DNA and proteins seemed to be the dominant macromolecules in the living cell, with RNA serving only to aid in creating proteins from the DNA blueprint.

The RNA world hypothesis places RNA at center-stage when life originated. This has been accompanied by many studies in the last ten years demonstrating important aspects of RNA function that were not previously known, and support the idea of a critical role for RNA in the functionality of life. In 2001, the RNA world hypothesis was given a major boost with the deciphering of the 3-dimensional structure of the ribosome, which revealed the key catalytic sites of ribosomes to be composed of RNA and for the proteins to hold no major structural role, and be of peripheral functional importance. Specifically, the formation of the peptide bond, the reaction that binds amino acids together into proteins, is now known to be catalyzed by an adenine residue in the rRNA: the ribosome is a ribozyme[2] [3] . This finding suggests that RNA molecules were most likely capable of generating the first proteins. Other interesting discoveries demonstrating a role for RNA beyond a simple message or transfer molecule include the importance of small nuclear ribonucleoproteins (SnRNPs) in the processing of pre-mRNA and RNA editing and reverse transcription from RNA in the maintenance of telomeres in the telomerase reaction.

The base cytosine does not have a plausible prebiotic simulation method because it easily undergoes hydrolysis.

Prebiotic simulations making nucleotides have conditions incompatible with those for making sugars (lots of formaldehyde). So they must somehow be synthesized, then brought together. However, they do not react in water. Anhydrous reactions bind with purines, but only 8% of them bind with the correct carbon atom on the sugar bound to the correct nitrogen atom on the base. Pyrimidines, however, do not react with ribose, even anhydrously.

For the nucleotides to form RNA, they must be activated themselves. Activated purine nucleotides form small chains on a pre-existing template of all-pyrimidine RNA. However, this does not happen in reverse because the pyrimidine nucleotides do not stack well.

Additionally, the ribose must all be the same enantiomer, because any nucleotides of the wrong chirality act as chain terminators. [1]

A.G. Cairns-Smith in 1982 criticized writers for exaggerating the implications of the Miller-Urey experiment. He argued that the experiment showed, not the possibility that nucleic acids preceded life, but its implausibility. He claimed that the process of constructing nucleic acids would require 18 distinct conditions and events that would have to occur continually over millions of years in order to build up the required quantities.

One of the leading researchers into RNA world models, Gerald Joyce, wrote in 1989:

The most reasonable assumption is that life did not start with RNA .... The transition to an RNA world, like the origins of life in general, is fraught with uncertainty and is plagued by a lack of experimental data. [2]