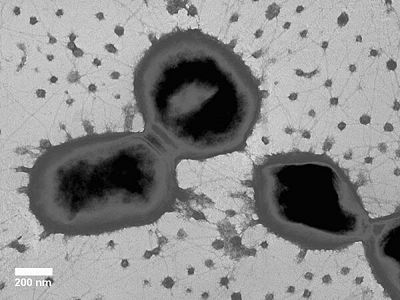 Porphyromonas gingivalis is an anaerobic, Gram-negative bacterium that can be found within the mouth of an individual. It is observed to be non-motile and rod-shaped. This bacterium is the principal source of periodontal disease. It has been found that in addition to causing human infections, this bacterium also causes much of the antibiotic resistance problems found today. [1] The way which it operates is very unique, since it is a Gram-negative bacteria, it can attach to the subgingival coating of the tooth, and it will substitute the Gram-positive bacteria that is originally there with its own thus causing an inflammation which will disengage the gums from the teeth. When colonized on blood agar it forms black spots. It is important to sequence the genome of this organism because it is found in many locations within the body not only in the oral cavity also in the gastrointestinal tract, respiratory tract and in the colon, this has many consequences. It has been ascertain that periodontal disease is associated with cardiovascular diseases [2] This bacterium is associated with Treptonema denticola and Bacteroides forsythus [3]

The genome of P. gingivalis is circular and its origin of replication is located at oriC which is juxtaposed by the genes dnaA and PG1949. The guanine and cytosine nucleotides make up approximately 49%. At the present, 2,015 genes have been acknowledged with a total of 23,43,479 nucleotides. It has been found that the genome of P. gingivalis is similar to that of Bacteroides thetaiotaomicron, and B.fragilis within the Cytophaga-Flavobacteria-Bacteroides genome. In addition, it closely resembles the genomes of Chlorobium tepidum, and thus this demonstrates the notion that the phyla of Chlorobia and Cytophaga-Flavobacteria-Bacteroides are associated with one another.

It has been discovered using genome analysis that this bacterium can metabolize a range of amino acids which will form different metabolic end products that are lethal to the host which is usually human, as well as harming the host’s gingival tissues, thus causing the expansion of periodontal disease. [4] It is found that the size of the genome of P. gingivalis is 2.34 mega bases. The sequencing of the entire genome is important in order to be able to determine if there are more medical effects of the bacterium besidees periodontal disease.

Researchers want to be able to establish mechanisms for the virulence as well as vaccines. The goals of this project include, the DNA sequence for the genome; analyzing and interpreting the sequence for the W83 strain; integrate the information that was obtained by the interpreted sequences and compare it with the experimental data from the P. gingivalis research community. Finally, the purpose of the genome sequences is to be able to make clones, reagents, and available information to the research community.[5] 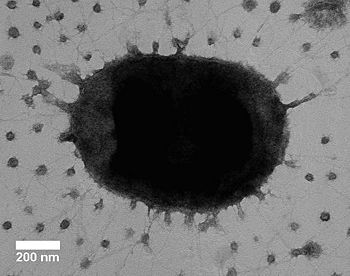 The P.gingivalis is a Gram-negative, non-motile, rod-shaped, anaerobic organism. To function, it undergoes a mechanism in which it binds to the subgingival layer of the mouth using fimbriae. These fimbriae not only aid in the role of adhesion but are also found to be pathogenic to the immune system. [6]

P. gingivalis takes part in Iron Transport, the way it does this is by using a hemin as a device to help it transport iron. When this builds up it results in the black pigmentation that is detected. To bring the hemin iron complex into the cell it uses an ABC Transporter. In regards to the metabolism P. gingivalis, it can undergo many different types such as:

Metabolism of Other Amino Acids

Metabolism of Cofactors and Vitamins

The organism P. gingivalis is usually found in the orifice of mammals usually humans. It is associated with Treptonema denticola and Bacteroides forsythus. There is no valid evidence that the relationship is symbiotic, but is still under researched theory. It contributes to the formation of gingivitis which is a periodontal disease.

The bacteria, P. gingivalis, in addition to others causes gingivitis as well as periodontis. Gingivitis is "A disorder involving inflammation of the gums; may affect surrounding and supporting structures of the teeth." [7] Periodontis is "inflammatory reaction of the tissues surrounding a tooth (periodontium), usually resulting from the extension of gingival inflammation into the periodontium." [8]

When a gathering of Gram-negative, anaerobic bacteria is observed on the gums, it develops a biofilm called plaque on the tooth. Such bacteria as P. gingivalis and Actinobacillus actinomycetemcomitans are examples. Thus P. gingivalis expresses proteolytic enzymes which regulate the protein function in the body [9] These enzymes are usually utilized for Cysteine and Arginine metabolism. However, here they affect the link between the tooth and the bone, thus ultimately separating the two from one another, which causes the taking apart of the tooth from jaw. [10]

Swelling, redness, and pain in the gums

Gums fail to have structure

It has come to the attention of researchers that pregnant women who are expected to have a premature delivery may be caused due to periodontal disease caused by the bacterium P. gingivalis. The notion that bacterial infection causes premature delivery is a common diagnosis. In an experiment with twenty-six women, the amniotic sac fluid was gathered as well as samples of the plaque that resided in the oral cavity on the subgingival layer. After doing many tests on both samples, it was found that indeed the colonies present were that of P. gingivalis. In addition this bacterium was found in the amniotic fluid. As a result of the experiments, of the twenty-six women showed that eight of them had the speculated disease: gingivitis, twelve of them had chronic periodontitis, and the remaining six did not have symptoms of periodontal disease. Thus, women who are pregnant, or are bearing in mind pregnancy, should take care of their “oral health,” making sure that they do not develop such strains of bacteria, to prevent harm to their future offspring.

It has come to the attention of researchers to investigate whether or not gum disease is associated with cardiovascular disease. In an experiment, they took four strains of P. gingivalis and permitted them to contaminate and live inside the artery cells. In a previous experiment Paulo Rodrigues, and his fellow researchers had determined that this bacterium is able to “invade and survive inside human artery cells.” Thus, in this new experiment, after the four strains were developed, they then mutated a gene in each seeking to find a “disability” if the bacterium could still “invade and survive” inside the artery cells. After running the tests, it was found that because the strains were now mutated they couldn’t invade as effectively and their survival rate was lessened. This is very important because now we can keep in mind that this pathogenic bacteria is linked with the artery cells, and with further study we may be able to develop “tools” for the averting cardiovascular diseases.

In autoimmune disease, a constituent known as IL-17 is accepted to be the main cause of bone destruction and inflammation. It has been learned that in addition to causing rheumatoid arthritis (RA) this compound IL-17 is also efficient in defensive action against bacteria such as P. gingivalis, and so it helps protect the bones located in the oral cavity. A research experiment was carried out using mice. They use mice lacking the receptors for IL-17 and others used mice with receptors hindered for IL-17; these experiments assumed that the hindered receptors was a therapeutic way for the RA, as well as other diseases such as multiple sclerosis, colitis, psoriasis and lupus. To determine the effects on periodontal disease, the experiment was conducted using the mice lacking the receptors and as a result it was found that these mice were more likely to bone loss, and thus developing the disease. The effects learned were not the ones expected by researchers.

A distinction between periodontal disease and an autoimmune disease should be made. A periodontal disease, is one in which it is considered an infectious disease, here leukocytes, have neutrophils as the major fighters of the infection. The IL-17 component is one of the determining factors of the regulation of neutrophils. Thus if an individual has a deficiency or is lacking the neutrophils it will lose most of its teeth due to the powerful emergence periodontal disease. The benefit of this researched experiment is that now researchers have discovered that there are more than twp types of T helper cells that contribute to the activities of the immune system. This IL-17 component is a type of T-cell “a cytokine, a protein hormone made by "T helper" cells of the immune system that stimulate immunity” which contributes to the autoimmune diseases. More research will be conducted in order to eradicate such autoimmune diseases, which harm their hosts.