In Euclidean geometry, a plane is an abstract concept that models the common notion of a flat surface — without depressions, protrusions, holes and a boundary — that for any two of its points entirely contains the straight line joining them.

Assuming a common (intuitive, physical) idea of the geometry of space, "plane" can be defined in terms of distances, orthogonality, lines, coordinates etc. In a more abstract approach (vector spaces) planes are defined as two-dimensional affine subspaces. In an axiomatic approach, basic concepts of elementary geometry, such as "point", "line" and "plane", are undefined primitives. 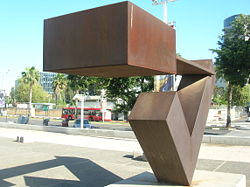 To define a plane is more complicated than it may seem.

It is tempting to define a plane as a surface with zero curvature, where a surface is defined as a geometric object having length and breadth but no depth. However, this is not a good idea; such definitions are useless in mathematics, since they cannot be used when proving theorems. Planes are treated by elementary geometry, but the notions of surface and curvature are not elementary, they need more advanced mathematics and more sophisticated definitions. Fortunately, it is possible to define a line via more elementary notions, and this way is preferred in mathematics. Still, the definitions given below are tentative. They are criticized afterwards, see axiomatic approach.

Four equivalent definitions of "plane" are given below. Any other definition is equally acceptable provided that it is equivalent to these. Note that a part of a plane is not a plane. Likewise, a line segment is not a line.

Below, all points, lines and planes are situated in the space (assumed to be a three-dimensional Euclidean space), and by lines we mean straight lines.

This is the plane orthogonal to the line AB through the middle point of the line segment AB.

Let two different points A and B be given. The set of all points C such that the lines AB and AC are orthogonal (that is, the angle BAC is right) is a plane.

This is the plane orthogonal to the line AB through the point A.

Every point F on the line DE belongs to the plane through given points A, B and C, provided that D belongs to AB, E belongs to BC, and D, E do not coincide with B.

This is the plane through A, B and C.

In other words, this plane is the set of all points F such that either F coincides with B or there exists a line through F that intersects the lines AB and BC (in distinct points).

In terms of Cartesian coordinates x, y, z ascribed to every point of the space, a plane is the set of points whose coordinates satisfy the linear equation

Here real numbers a, b, c and d are parameters such that at least one of a, b, c does not vanish.

Some properties of planes

For any three points not situated in the same straight line there exists one and only one plane that contains these three points.

If two points of a straight line lie in a plane, then every point of the line lies in that plane.

If two planes have a common point then they have at least a second point in common.

Two planes either do not intersect (are parallel), or intersect in a line, or coincide.

A line either does not intersect a plane (is parallel to it), or intersects it in a single point, or is contained in the plane.

Two lines perpendicular to the same plane are parallel to each other (or coincide).

Two planes perpendicular to the same line are parallel to each other (or coincide).

The definitions given above assume implicitly that the 3-dimensional Euclidean space is already defined, together with (at least one of) such notions as distances, angles, straight lines, Cartesian coordinates, while planes are not defined yet. However, this situation never appears in mathematical theory.

In the axiomatic approach points, lines and planes are undefined primitives.

The modern approach (below) defines planes in a completely different way.

A less formal version of this approach uses points, vectors and scalar product (called also dot product or inner product) of vectors without mentioning linear and affine spaces. Optionally, Cartesian coordinates of points and vectors are used. See algebraic equations below. There, in particular, equivalence between the definition via right angles (orthogonality) and the definition via Cartesian coordinates is explained.

Plane geometry studies the properties of plane figures (and configurations). Plane figures in elementary geometry are sets of points, lines, line segments and sometimes curves that fall on the same plane. For example, triangles, polygons and circles. In plane geometry every figure is plane, in contrast to solid geometry.

In analytic geometry several closely related algebraic equations are known for a plane in three-dimensional Euclidean space. A few algebraic representations will be discussed. 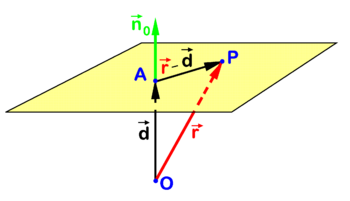 PD Image
The equation for a plane. P is an arbitary point in plane;

One such equation is illustrated in the figure. Point P is an arbitrary point in the plane and O (the origin) is drawn outside the plane. The point A in the plane is chosen such that vector

is orthogonal to the plane. The collinear vector

is a unit (length 1) vector normal (perpendicular) to the plane which is known as the normal of the plane in point A. Note that d is the distance of O to the plane. The following relation holds for an arbitrary point P in the plane (according to the definition via right angles):

This equation for the plane can be rewritten in terms of coordinates with respect to a Cartesian frame with origin in O. Dropping arrows for component vectors (real triplets) that are written bold, we find

Moreover, the Hesse normal form for the plane (called after the 19th century mathematician Ludwig Otto Hesse) is obtained,

it is characterized by the use of a unit-length vector

rather than an arbitrary vector orthogonal to the plane.

where f , d, and n0 are collinear. The equation may also be written in the following mnemonically convenient form 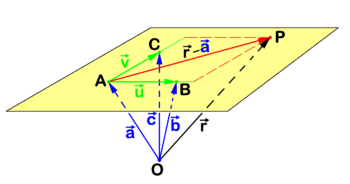 PD Image
Plane through points A, B, and C.

The figure shows a plane that by definition passes through three different points A, B, and C that are not on one line. The point P is an arbitrary point in the plane and the reference point O is again drawn outside the plane, but the case that the plane passes through O is not excluded. Referring to figure 2 we introduce the following definitions

Clearly the following two non-collinear vectors belong to the plane

The real numbers λ and μ specify the direction of

. Hence the following equation for the position vector

of the arbitrary point P in the plane:

are the position vectors of the three points that define the plane.

In industry, a surface plate is a piece of cast iron or other appropriate material whose surface (or rather a part of it) is made as close as possible to a geometric plane (or rather a part of it, usually a square). An old method of their manufacturing is the three-plate method: three roughly flat surfaces become more and more flat when rubbing against each other: first and second; second and third; third and first; first and second again, and so on. It is possible to achieve a surface close to a plane up to 10–5 of its size.