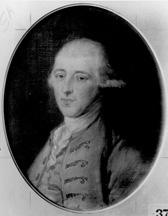 Pierce Butler (1744-1822) was an American military leader and politician. He was one of the Founding Fathers of the United States. He was a South Carolinian delegate to the U.S. Constitutional Convention. From 1789 to 1796 and from 1802 to 1804 he served in the United States Senate representing South Carolina.

Butler was born in County Carlow, Ireland. His father was Sir Richard Butler, a member of the British Parliament. Butler did not inherit his father's property because of primogeniture. He joined the military and came to United States in 1758 as an officer in the British army. When colonial resistance began in the Colonial America, his unit participated the suppression of the unrest and even fired shots in the Boston Massacre. He married Mary Middleton in 1771 and became a planter in South Carolina, owning a considerable amount of African slaves.

He switched to the side of the Patriots during the American Revolution and fought against Britain. He assumed the position of adjutant general and helped the reorganization of the South Carolina military. After the war, his properties were largely ruined and he had to go to Europe for a loan. In 1785 he returned to America.

In 1787, he joined John Rutledge, Charles Cotesworth Pinckney, and Charles Pinckney to form the South Carolina delegation to the Constitutional Convention in Philadelphia. He supported a strong national government but also tried to protect regional interests. In the convention he was an ardent defender of the institution of slavery and even inserted a provision in the Constitution to ensure the capture of fugitive slaves. After the convention, however, he did not attend the state meeting to ratify the new Constitution of the United States.

With the implementation of the new Constitution, he was elected to the United States Senate in 1789. From 1789 to 1791 he was Pro-Administration, but in 1791 he switched to Anti-Administration faction. In 1795 he joined the newly formed Democratic-Republican Party. He resigned from Senate in 1796 but was elected again in 1802 to fill the vacancy caused by John Ewing Colhoun's death. He resigned again in 1804. In the Senate, he supported some of Alexander Hamilton's Federalist programs but not all of them. He was a rigorous defender of the interests of western farmers and the poor, while continuing to support slavery.

After his retirement from politics, he became a wealthy businessman. He died in Philadelphia in 1822. His grandson, Pierce Mease Butler, was the husband of the famous English actress Fanny Kemble.