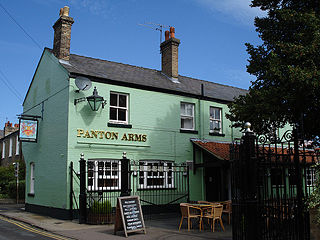 The Panton Arms is a pub in Cambridge, U.K. that is often frequented by scientists from the Chemistry Department of the University of Cambridge, just 200m away. It became more widely known in February 2010 when a group of scientists released the Panton Principles — a set of recommendation on how to license and label scientific data that have been made public — that they had drafted in the Panton Arms starting in June 2009.

PD Image
The Panton Principles for the sharing of scientific data were named after the Panton Arms, where their first draft has been written.

The pub features a "white gingerbread building festooned with hanging baskets of petunias and nestled among rows of Victorian terraced houses" with back wrought iron gates.[1] The atmosphere, service and the food at the pub have generated mixed reviews from online reviewers.[2] It serves beer and there is adequate parking nearby. One reviewer described how it seemed "hidden in a residential area".[3] It occupies the site of a former brewery.[1]