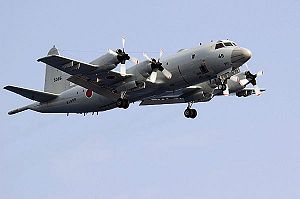 A land-based aircraft originally developed for the U.S. Navy for anti-submarine warfare (ASW), the P-3 Orion soon took on the broader role of a maritime patrol aircraft. With the decreasing emphasis on "blue-water", open-ocean, ASW with the end of the Cold War, the Orion has been modified so it is useful for surveillance over land, as well as ASW, ASuW, and surveillance and reconnaissance in littoral warfare.

The Navy has shifted the P-3C's operational emphasis to the littoral regions and is improving the anti-surface warfare (ASUW) capabilities of the P-3C. While it is to be replaced by the P-8 Poseidon, it will be in service through the early 21st century.[1]

The original version was based on the L-188 Electra commercial airliner, followed by continuing improvements:[2]

A new Littoral Surveillance Radar System (LSRS), with maritime, littoral, and overland targeting capability, has been added to some P-3's assigned to Patrol Squadron 46 (VP-46) based at Whidbey Island Naval Air Station in the state of Washington.

The OZ-72 and the AN/USC-42(V)3 both link to the OASIS III, which can accept GPS-guided targeting information from onboard sensors and communicate it, over the horizon if needed, via JTIDS Link 16

The principal sensors are passive and active sonobuoy dropped by the P-3 or cooperating aircraft. Magnetic Anomaly Detection is a supplementary system, as well as radar detection of periscopes or surfaced submarines. Never to be forgotten is the human eye; submarines at shallow depth can be seen in clear water.

A wide range of equipment receives, processes, and displays information from them:[3]

Updated Orions can engage surface targets both on water and inland using air-to-surface missiles of several types. The basic AGM-84 Harpoon is a long-range anti-shipping missile, but the AGM-84 SLAM is a long-range land attack missile with a high degree of commonality.

For shorter range engagements, the aircraft uses the AGM-65 Maverick, which has a wide range of sensor and warhead combinations, as well as extreme precision. Most often, the passive infrared seeker is used.