From Citizendium
(Redirected from GPS)
Jump to navigation Jump to search

The Global Satellite Navigation Systems (GNSS) allows small electronic devices to determine their location (Longitude, Latitude, and Altitude) as well as time with an accuracy of up to a few centimetres using time signals transmitted along a line of sight by radio from satellites. Receivers on the ground with a fixed position can also be used to calculate the precise time as a reference for scientific experiments.

The following systems are known collectively as the Global Navigation Satellite Systems (GNSS).

The most used satellite navigation system is the United States' Global Positioning System (GPS), developed for military use but widely used in civilian applications. This consists of 29 satellites in full operation capability (FOC) status that orbit in six different planes. The exact number of satellites varies as satellites are replenished when older ones are retired. They orbit at an altitude of approximately 20,000 km with an inclination of 55 degrees, making a complete orbit in approx. 11 hours, 58 minutes. All Satellites are dual-frequency and broadcast on L1 and L2 using spread-sprectrum modulation. The satellites are tracked by a world-wide network of monitor stations. The tracking data is sent to a master control station that continuously updates position and clock estimates for each satellite. The updated data is then uplinked to the satellite via one of several ground antennas.

The Russian counterpart to GPS is called GLONASS and was used as a backup by some commercial GPS receivers. As of 2006, there are 114 satellites declared operational. They are organized into three orbital planes with an inclination of 64.8 degrees. They make a complete orbit in approx. 11 hours, 15.5 minutes. All satellites broadcast L1 and L2 signals on unique frequency channels, the transmission of an L3 signal is planned.

The European Union and European Space Agency agreed on March, 2002 to introduce their own alternative to GPS, called Galileo, developed by the international consortium Galileo Industries. At a cost of about $2.5 billion, the required satellites will be launched between 2006 and 2008and the system will be working, under civilian control, from 2011 (Three years later than originally anticipated). The first satellite was actually launched on December 28th 2005. Galileo is expected to be compatible with the next-generation GPS system that will be operational by 2012. The receivers will be able to combine the signals from 30 Galileo and 28 GPS satellites to greatly increase the accuracy. The Galileo satellites will be organized into three orbital planes with an inclination of 56 degrees, making a complete orbit in approx. 14 hours.

Serious delays were reported in 2007. German Transport Minister Wolfgang Tiefensee, speaking on behalf of the EU, said: "Galileo is going through a deep and grave crisis....We're in a dead end street. The cardinal problem is that the companies still have not been able to agree on the way forward. We need to find an alternative solution." The consortium comprises leading aerospace and telecom concerns: EADS, Thales, Inmarsat, Alcatel-Lucent, Finmeccanica, AENA, Hispasat, and TeleOp.[1]

These systems provide signals, that can be used by receivers similar to Differential GPS signals to improve the accuracy of the determined position. WAAS is operated by the United States, EGNOS by the European Space Agency, the European Commission and EUROCONTROL and MSAS by Japan and several other asian countries. All SBAS-Signals are fully compatible with each other, providing a world wide network of correctional data for receivers.

China has started to launch a series of satellites intended to form a system called the Beidou navigation system.

An early predecessor were the ground based LORAN and Omega systems, which used terrestrial longwave radio transmitters instead of satellites. These systems broadcast a radio pulse from a known "master" location, followed by repeated pulses from a number of "slave" stations. The delay between the reception and sending of the signal at the slaves was carefully controlled, allowing the receivers to compare the delay between reception and the delay between sending. From this the distance to each of the slaves could be determined, providing a fix.

The first satellite navigation system was Transit, a system deployed by the US military in the 1960s. Transit's operation was based on the Doppler effect: the satellites traveled on well-known paths and broadcast their signals on a well known frequency. The received frequency will differ slightly from the broadcast frequency because of the movement of the satellite with respect to the receiver. By monitoring this frequency shift over a short time interval, the receiver can determine its location to one side or the other of the satellite, and several such measurements combined with a precise knowledge of the satellite's orbit can fix a particular position.

Part of an orbiting satellite's broadcast included its precise orbital data. In order to ensure accuracy, the US Naval Observatory (USNO) continuously observed precisely the orbits of these satellites. As a satellite's orbit deviated, the USNO would send the updated information to the satellite. Subsequent broadcasts from an updated satellite would contain the most recent accurate information about its orbit.

Modern systems are more direct. The satellite broadcasts a signal that contains the position of the satellite and the precise time the signal was transmitted. The position of the satellite is transmitted in a data message that is superimposed on a code that serves as a timing reference. The satellite uses an atomic clock to maintain synchronization of all the satellites in the constellation. The receiver compares the time of broadcast encoded in the transmission with the time of reception measured by an internal clock, thereby measuring the time-of-flight to the satellite. Several such measurements can be made at the same time to different satellites, allowing a continual fix to be generated in real time.

Each distance measurement, regardless of the system being used, places the receiver on a spherical shell at the measured distance from the broadcaster. By taking several such measurements and then looking for a point where they meet, a fix is generated. However, in the case of fast-moving receivers, the position of the signal moves as signals are received from several satellites. In addition, the radio signals slow slightly as they pass through the ionosphere, and this slowing varies with the receiver's angle to the satellite, because that changes the distance through the ionosphere. The basic computation thus attempts to find the shortest directed line tangent to four oblate spherical shells centered on four satellites. Satellite navigation receivers reduce errors by using combinations of signals from multiple satellites and multiple correlators, and then using techniques such as Kalman filtering to combine the noisy, partial, and constantly changing data into a single estimate for position, time, and velocity. 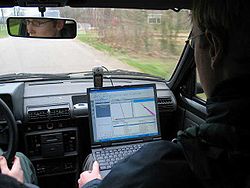 Satellite navigation using a laptop and a GPS receiver

In these ways, satellite navigation can be regarded as a force multiplier. In particular, the ability to reduce unintended casualties has particular advantages for wars being fought by democracies, where public relations is an important aspect of warfare. For these reasons, a satellite navigation system is an essential asset for any aspiring military power.

Satellite navigation systems have a wide variety of civilian uses: