In chemistry, hybridisation or hybridization (see also spelling differences) is the concept of mixing atomic orbitals to form new hybrid orbitals suitable for the qualitative description of atomic bonding properties. Hybridised orbitals are very useful in the explanation of the shape of molecular orbitals for molecules. It is an integral part of valence bond theory and the valence shell electron-pair repulsion (VSEPR) theory [1] [2].

The hybridisation theory was promoted by chemist Linus Pauling[3] in order to explain the structure of molecules such as methane (CH4). Historically, this concept was developed for such simple chemical systems but the approach was later applied more widely, and today it is considered an effective heuristic for rationalizing the structures of organic compounds.

Hydridization theory is, however, considered less useful and less informative than Molecular Orbital Theory. Problems with hybridization are especially notable when the d orbitals are involved in bonding, as in coordination chemistry and organometallic chemistry. Although hybridisation schemes in transition metal chemistry can be used, they are not accurate and have little predictive power.

The hybridisation theory finds its use mainly in organic chemistry, and mostly concerns C, N and O (and to a lesser extent P and S). Its explanation starts with the way bonding is organized in methane.

Hybridisation describes the bonding atoms from an atom's point of view. That is, for a tetrahedrally coordinated carbon (e.g. methane, CH4), the carbon should have 4 orbitals with the correct symmetry to bond to the 4 hydrogen atoms. The problem with the existence of methane is now this: Carbon's ground-state configuration is 1s² 2s² 2px¹ 2py¹ or perhaps more easily read:

The valence bond theory would predict, based on the existence of two half-filled p-type orbitals (the designations px py or pz are meaningless at this point, as they do not fill in any particular order), that C forms two covalent bonds. CH2. However, methylene is a very reactive molecule (see also: carbene) and cannot exist outside of a molecular system. Therefore, this theory alone cannot explain the existence of CH4.

Furthermore, ground state orbitals cannot be used for bonding in CH4. While exciting a 2s electron into a 2p orbital would theoretically allow for four bonds, according to the valence bond theory which has been proved experimentally correct for systems like O2 this would imply that the various bonds of CH4 would have differing energies due to differing levels of orbital overlap. Once again, this has been experimentally disproved: any hydrogen can be removed from a carbon with equal ease.

To summarise, to explain the existence of CH4 (and many other molecules) a method by which as many as 12 bonds (for transition metals) of equal strength (and therefore equal length) can be created was required.

The first step in hybridisation is the excitation of one (or more) electrons (we will have a look on the carbon atom in methane, for simplicity of the discussion):

The combination of these forces creates new mathematical functions known as hybridised orbitals. In the case of carbon attempting to bond with four hydrogens, four orbitals are required. Therefore, the 2s orbital (core orbitals are almost never involved in bonding) mixes with the three 2p orbitals to form four sp3 hybrids (read as s-p-three). See graphical summary below.

In CH4, four sp³ hybridised orbitals are overlapped by hydrogen's 1s orbital, yielding four sigma (σ) bonds. The four bonds are of the same length and strength. This theory fits our requirements. 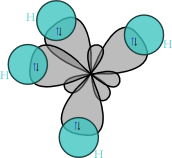 An alternative view is: View the carbon as the C4- anion. In this case all the orbitals on the carbon are filled:

If we now recombine these orbitals with the empty s-orbitals of 4 hydrogens (4 protons, H+) and allow maximum separation between the 4 hydrogens (i.e. tetrahedral surrounding of the carbon), we see that at any orientation of the p-orbitals, a single hydrogen has an overlap of 25% with the s-orbital of the C, and a total of 75% of overlap with the 3 p-orbitals (see that the relative percentages are the same as the character of the respective orbital in an sp3-hybridisation model, 25% s- and 75% p-character).

According to the orbital hybridization theory the valence electrons in methane should be equal in energy but its photoelectron spectrum [4] shows two bands, one at 12.7 eV (one electron pair) and one at 23 eV (three electron pairs). This apparent inconsistency can be explained when one considers additional orbital mixing taking place when the sp3 orbitals mix with the 4 hydrogen orbitals.

Other carbon based compounds and other molecules may be explained in a similar way as methane, take for example ethene (C2H4). Ethene has a double bond between the carbons. The Lewis structure looks like this:

Carbon will sp2 hybridise, because hybrid orbitals will form only sigma bonds and one pi bond is required for the double bond between the carbons. The hydrogen-carbon bonds are all of equal strength and length, which agrees with experimental data.

In sp2 hybridization the 2s orbital is mixed with only two of the three available 2p orbitals:

forming a total of 3 sp2 orbitals with one p-orbital remaining. In ethene the two carbon atoms form a sigma bond by overlap of two sp2 orbitals and each carbon atoms forms two covalent bonds with hydrogen by s - sp3 overlap all with 120° angles. the pi-bond between the carbon atoms perpendicular to the molecular plane is formed by 2p-2p overlap.

The amount of p-character is not restricted to integer values, i.e. hybridisations like sp2.5 are also readily described. In this case the geometries are somewhat distorted from the ideally hybridised picture. For example, as stated in Bent's rule, a bond tends to have higher p-character when directed toward a more electronegative substituent.

The chemical bonding in compounds such as alkynes with triple bonds is explained by sp hybridization.

In this model the 2s orbital mixes with only one of the three p-orbitals resulting in two sp orbitals and two remaining unchanged p orbitals. The chemical bonding in acetylene (C2H2) consists of sp - sp overlap between the two carbon atoms forming a sigma bond and two additional pi bonds form by p - p overlap. Each carbon also bonds to hydrogen in a sigma s - sp overlap at 180° angles.

Using hybridisation, along with the VSEPR theory, helps to explain molecule shape:

This holds if there are no lone electron pairs on the central atom. If there are, they should be counted in the Xi number, but bond angles become smaller due to increased repulsion. For example, in water (H2O), the oxygen atom has two bonds with H and two lone electron pairs (as can be seen with the valence bond theory as well from the electronic configuration of oxygen), which means there are four such 'elements' on O. The model molecule is, then, AX4: sp³ hybridization is utilized, and the electron arrangement of H2O is tetrahedral. This agrees with the shape, we know water has a non-linear, bent structure, with an angle of 104.5 degrees (the two lone-pairs are not visible).

Hybridization theory has been superseded by MO theory

Although the language and pictures arising from Hybridization Theory, more widely known as Valence Bond Theory, remain widespread in synthetic organic chemistry, this qualitative analysis of bonding has been largely superseded by Molecular Orbital Theory. For example, inorganic chemistry texts have all but abandoned instruction of hybridization, except as a historical footnote.[5][6] One specific problem with hybridization is that is incorrectly predicts the photoelectron spectra of many molecules, including such fundamental species such as methane and water. From a pedogical perspective, hybridization approach tends to over-emphasize localization of bonding electrons and does not effectively embrace molecular symmetry as does MO Theory.