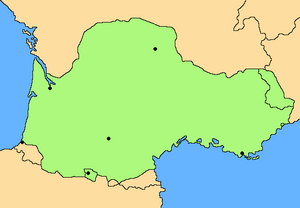 Location of Occitania (in green) with state boundaries

Occitania (Occitan: Occitània[1]) is a historic country in southwestern Europe where Occitan is the autochthonous language. It is politically located in southern France, part of Italy (Occitan Valleys), part of Spain (Aran Valley) and Monaco. Occitania is often referred to as the “Miègjorn” in Occitan and the “Midi” in French (i.e. the “South”), although this term lacks linguistic precision. It has approximately 15 millions inhabitants in an area of 190 000 km².[2]

Since the 20th century, the use of Occitan has dwindled in front of dominant state languages such as French, Italian and Spanish but simultaneously, a dynamic movement supports Occitan which is now an official language in Aran Valley and a protected language in Italy.

Occitania forms a large isthmus between the Iberian Peninsula and the rest of Europe, stretching between two seas, the Mediterranean Sea and the Atlantic Ocean, and three mountains, the Alps, the Massif Central and the Pyrenees.

The largest cities are Marseille, Toulouse, Bordeaux and Nice.

The current, administrative regions that are wholly or partly in Occitania are the following. In France: Aquitaine, Poitou-Charentes, Limousin, Centre, Midi-Pyrénées, Auvergne, Languedoc-Roussillon, Rhône-Alpes and Provence-Alpes-Côte-d'Azur. In Italy: Piedmont and Liguria. In Spain: Catalonia.

Since the Middle Ages, Occitania has always existed as a cohesive, cultural area with a certain consciousness of its unity,[3] as the literary development of the Occitan language shows (and now the usual term Midi). Nonetheless it has never been a political entity. Several political attempts of unification existed, especially between the 11th and the 13th centuries, carried on by the Duchy of Aquitania, the County of Toulouse and the Kingdom of Aragon.[4] Since the 19th century, several movements have tried to improve the social use of Occitan and to achieve the public recognition of Occitan culture. Part of the Occitan movement expresses political claims ranging from regional autonomy to full independence. In 1990, Occitan was recognized as an official language in Aran Valley (Spain)[5] and in 1999, it became a protected language in a large part of the Occitan Valleys (Italy).[6]