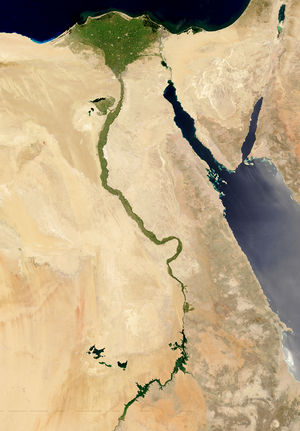 The Nile is one of the longest rivers in the world at about 6,695km from its source in the south to the Mediterranean Sea in the north.[1] The Nile floods predictably in about August each year. The silt deposited on the floodplains fertilises the ground and leaves it suitable for agriculture. The river has a significant impact on the surrounding area, making it suitable for inhabitation, and while in Egypt the surrounding area is desert, the land close to the Nile is fertile and productive.[2] When the Romans conquered Egypt its produce was shipped to feed the populous of Rome, and Egypt was dubbed the "breadbasket of the Empire".[3] 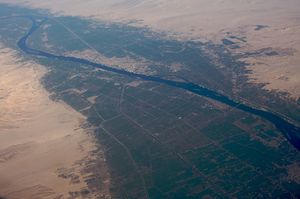 (CC [2]) Photo: "lowjumpingfrog"
Beyond the reach of the Nile, Egypt gives way to dry, infertile desert.

There has historically been debate about which is the longest river in the world: the Nile, or the Amazon in South America. Throughout the 20th century the Nile was considered longer. Though Brazilian scientists renewed the Amazon's claims in 2007, Glenn Switkes of the International Rivers Network remarked that the matter was "trivial".[4]