Natural gas condensate is a low-boiling mixture of hydrocarbon liquids that are present as gaseous components in the raw natural gas produced from many natural gas fields.[1]

If the raw gas temperature is reduced to below its hydrocarbon dew point, the liquids begin to condense out of the gas. The resulting condensate is also referred to as simply condensate, or gas condensate, or sometimes natural gasoline because it contains hydrocarbons within the gasoline boiling range.

Raw natural gas may come from any one of three types of gas wells:[2][3]

There are hundreds of wet gas fields worldwide and each has its own unique gas condensate composition. However, in general, gas condensate has a specific gravity ranging from 0.5 to 0.8 and may contain:[1][4][5][6]

Separating the condensate from the raw natural gas 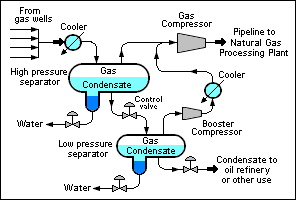 There are many different equipment configurations for the processing required to separate natural gas condensate from a raw natural gas. The schematic flow diagram to the right depicts just one of the possible configurations.[7]

At the raw natural gas processing plant, the gas will be dehydrated and acid gases and other impurities will be removed from the gas. Then the ethane (C2), propane (C3), butanes (C4) and C5 plus higher molecular weight hydrocarbons (referred to as C5+) will also be removed and recovered as byproducts.

The water removed from both the high and low pressure separators will probably need to be processed to remove hydrogen sulfide before the water can be disposed of or reused in some fashion.

Some of the raw natural gas may be re-injected into the gas wells to help maintain the gas reservoir pressures.

Characterizing the amount of condensate in natural gas

Care must be taken not to confuse the two different definitions of the term GPM.