The Mugwumps were Republican political activists who supported Democratic candidate Grover Cleveland in the presidential election of 1884. They switched parties because they rejected the financial corruption associated with Republican candidate, James Blaine. In a close election the Mugwumps possibly made the difference in New York state and swung the election to Cleveland.

After the election, mugwump survived for more than a decade as an epithet in American politics. Many Mugwumps became Democrats or remained independents; most continued to support reform well into the 20th century. [1] During the Third Party System, party loyalty was in high regard and independents were rare. Theodore Roosevelt stunned his upper class New York City friends by supporting Blaine in 1884; by rejecting the Mugwumps he kept alive his Republican party leadership.[2] 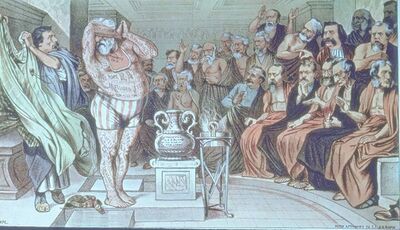 1884 cartoon in Puck magazine ridicules Blaine as the tattooed-man, with many indelible scandals.

New England and the northeastern United States had been a stronghold of the GOP since the Civil War era, but the Mugwumps considered Blaine to be untrustworthy, and a fraudulent candidate. Their idealism and reform sensibilities led them to oppose the political corruption in the politics of the Gilded Age. [3] 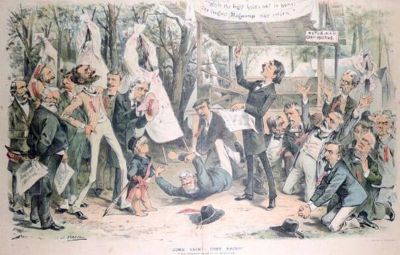 At religious revival meeting, GOP regulars (on right) call the dissident Mugwumps (on left) to return to the fold. Cartoon by Kepler in Puck 1884

Political patronage, also known as the "spoils system," was the issue that angered many reform-minded Republicans, and lead them to choke on Blaine's candidacy. In the spoils system, the winning candidate would dole out government positions to those who had supported his political party prior to the election. Although the Pendleton Act of 1883 established the Civil Service Commission, and made competency and merit the basic qualifications for government positions, its effective implementation was slow. Political affiliation continued to be the basis for appointment to many positions. [4]

In the early 1880s, the issue of political patronage split the Republican Party down the middle for several consecutive sessions of Congress. The party was divided into two warring factions, each with creative names. The side that held the upper hand in numbers and popular support were the "Half-Breeds," led by Blaine. The Half-Breeds supported civil service reform, and often blocked legislation and political appointments put forth by their main congressional opponents, the "Stalwarts," led by Roscoe Conkling of New York. 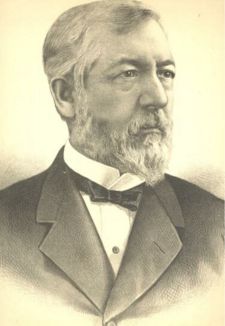 The Mugwumps were Republicans who refused to support Republican presidential candidate James G. Blaine in 1884.

Ironically, Blaine was from the reform wing of his own party, but the Mugwumps rejected his candidacy. This division among Republicans may have contributed to the victory in 1884 of Grover Cleveland, the first president elected from the Democratic party since before the Civil War. In the period from 1876 to 1892, presidential elections were closely contested at the national level, but the states themselves were mostly dominated by a single party, with Democrats prevailing in the South and the Republicans in the Northeast. Although the defection of the Mugwumps may have helped Cleveland win in New York, one of the few closely contested states, historians attribute Cleveland's victory nationwide to the rising power of urban immigrant voters. [5]

Several historians of the 1960s and 1970s portrayed the Mugwumps as members of an insecure elite, one that felt threatened by changes in American society. These historians often focused on the social background and status of their subjects, and the narratives they have written share a common outlook. [6]

Mugwumps tended to come from old Protestant families of New York and New England, and often from inherited wealth. They belonged to or identified with the emerging business and professional elite, and were often members of the most exclusive clubs. Yet were angered by the rise of machine politics, one aspect of which was the spoils system, and by the rising power of Irish Catholics in American politics. They excelled as authors and essayists, yet their writings indicated their social position and class loyalties. In politics, they tended to be ineffectual and unsuccessful, unable and unwilling to operate effectively in a political environment where patronage was the norm. 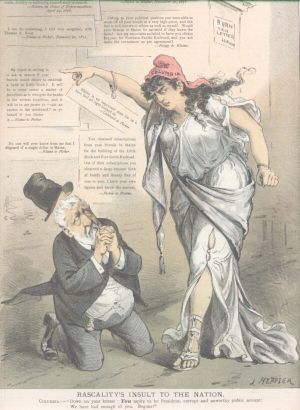 Tucker (1998) attempts to rehabilitate the Mugwumps. According to Tucker, the Mugwumps embodied the liberalism of the 19th century, and their rejection by 20th century historians, who embraced the government intervention of the New Deal and the Great Society, is not surprising. To Tucker, their eloquent writings speak for themselves, and are testament to a high minded civic morality.

Origin of the term 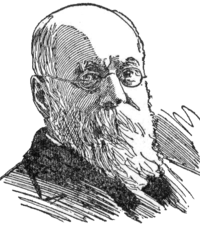 Dictionaries report "mugguomp" was an Algonquin word meaning "person of importance" or "war leader." Charles Anderson Dana, the colorful newspaperman and editor of the New York Sun, is said to have given the Mugwumps their political moniker. Dana made the term plural and derided them as amateurs and public moralists.[7]

The epithet "goody-goody" from the 1880s goo-goo from the 1890s, a corruption of "good government," was used in a similar derogatory manner. Whereas mugwump has become an obscure and almost forgotten political moniker, goo-goo has been revivified, especially in Chicago, Illinois, by the political columns of Mike Royko.[9]