'Mongoloid' is the first single released by Devo in 1977, on the Booji Boy label. It was backed with the song 'Jocko Homo'. 'Mongoloid' had one of the first music videos made using collage. The song would later be re-recorded by Devo and appear on the album Q: Are We Not Men? A: We Are Devo! in 1978. It is also a staple of Devo's live shows. 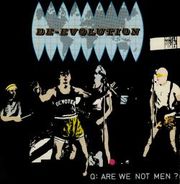 'Mongoloid', like many of Devo's early songs, was built on a motorik beat. The song opens with a 4/4 electric bass line, which is then joined by drums, and electric guitar. Over this, a swooping synthesizer line is played on Minimoog, using the pitch bend to create a spooky effect. The synth is not used as a lead instrument during the song, but only the opening and closing. The vocals of the song are sung as a duet by Gerald V. Casale and 'Bob 1' (Bob Mothersbaugh). On the original single, the vocals are deliberately sung in a nasal fashion.

The lyrics discuss an individual afflicted with Down Syndrome, formerly known as Mongolism. Despite his affliction, he is able to live a normal life so that nobody knows of his extra chromosome. Despite being a positive song, it has received much criticism due to its controversial title.

'Mongoloid' was Devo's second music video, after 'The Truth About De-Evolution'. It was not actually made by the band, but by experimental filmmaker Bruce Conner. Conner combined 1950s television advertisements, science fiction film clips (Including a scene from It Came From Outer Space!), and scientific documentaries with abstract animation and original film work. Devo marketed the film as 'A documentary film exploring the manner in which a determined young man overcame a basic mental defect and became a useful member of society. Insightful editing techniques reveal the dreams, ideals and problems that face a large segment of the American male population. Educational. Background music written and performed by the DEVO orchestra'.

'Mongoloid' appears as a bonus feature on The Complete Truth About Devolution DVD.

'Mongoloid' was originally recorded as a single released on the Booji Boy Records imprint of Man-Ray Music in 1977. The original single was a triple gatefold, held together with stickers. The inside of the gatefold displayed the lyrics of the two songs in either blue or black ink, depending on the pressing. The back cover of the single was an image of Booji Boy with the text 'We're all Devo! Booji Boy XO'.

As Devo gained fame, Stiff Records in the UK agreed to release the single on their label. There were several pressings of the 'Mongoloid' single with varying packages, ranging from a full triple gatefold, to a simple picture sleeve, to a generic Stiff Records paper sleeve. The Stiff Records releases are marked by the Stiff logo in the lower left hand corner of the front cover. 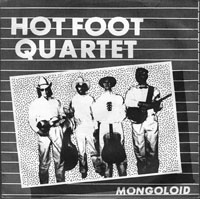 For Devo's debut album Q: Are We Not Men? A: We Are Devo!, 'Mongoloid' was re-recorded. This version contains much more involved synthesizer playing throughout the song rather than during the opening and closing. An 'E-Z Listening' version of 'Mongoloid' was made for playing before concerts and appears in the 1987 E-Z Listening Disc. In 2002, Devo performed a techno version of the song at a special show for the writers and producers of the cartoon Rugrats (whose theme song Mark Mothersbaugh composed). It has more recently been sampled by electronic outfit Layo & Bushwacka, on the track titled 'Love Story' which was rather successful in Europe and Australia. Australian ska band the Porkers also covered this song for their 1994 album, Grunt! There is also a bluegrass version of the song, recorded in Cleveland, Ohio, by the Hotfoot Quartet in 1980 and released as a 45 rpm single on the Black Snake label. A choral version of the song, both a cappella and with instrumental accompaniment, was released by the German band Popchor Berlin in 2002 on their EP-1 album. Power Metal group Demolition Hammer also covers the song on their 1994 album Timebomb.