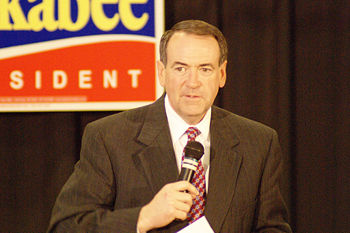 Mike Huckabee (born Michael Dale Huckabee, 24 August 1955), an American politician and former Governor of Arkansas from 1996 to 2007, was a contender for the Republican Party nomination in the 2008 presidential election. Little known nationally through mid 2007, he climbed the polls steadily and won the closely watched Iowa caucus on Jan. 3, 2008. His political base is comprised of evangelical Christians. He had been attacked as a tax-and-spend liberal, especially by rival Fred Thompson.[1] His funding base is meager, but national polls put him in first or second place, with John McCain, his main rival. Analysts point to his evangelical base, his conservatism, his appeal to southerners and his winsome personality as critical factors in his move from obscurity to the top rank of political contenders.[2]

Huckabee is the author of health books featuring his exercise and weight-loss exercise program, and bass guitar player for his rock band, Capitol Offense. Before he entered politics he was formerly a minister in Southern Baptist churches in Arkansas. He is currently hosting his own talk show on Fox News.

During the 2008 campaign, he wrote in Foreign Affairs,

The Bush administration's arrogant bunker mentality has been counterproductive at home and abroad. My administration will recognize that the United States' main fight today does not pit us against the world but pits the world against the terrorists. At the same time, my administration will never surrender any of our sovereignty, which is why I was the first presidential candidate to oppose ratification of the Law of the Sea Treaty, which would endanger both our national security and our economic interests.[4]

In 2009, he rejected a two-state solution to the Israel-Palestine Conflict, saying there is no room for a Palestinian state "in the middle of the Jewish homeland" and that the international community should consider giving the Palestinians a state some place else. [5]

A college news magazine, supported by the [[Center for American Progress[, in a wide-ranging interview covered in the Washington Post and elsewhere,[6] said he agreed that an atheist could be fit to serve as president. “I’d rather have an honest atheist than a dishonest religious person. It’s better to have a person who says, ‘Look, I just don’t believe, and that’s where my honest position happens to be. I’m frankly more OK with that than a person who says, ‘Oh, I am very much a Christian. I very much love God.’ And then they live as if they are atheists, as if they have no moral groundings at all. That’s more troubling.”

“I think it’s nice if a person believes in God,” Huckabee said. “I’d hate to think somebody was making decisions who thought that he couldn’t be higher than himself.”[7]

Saying “Children are not puppies," he also opposed foster or adoptive parent roles for same-sex couples. . “This is not a time to see if we can experiment and find out, how does this work? ...I think this is not about trying to create statements for people who want to change the basic fundamental definitions of family..And always we should act in the best interest of the children, not in the seeming interest of the adults."

In a response on his political action committee website, he said

The young college student hopefully will find a career other than journalism. I would ask that he release the unedited tape of our conversation. I believe that what people do as individuals in their private lives is their business, but I do not believe we should change the traditional definition of marriage. [8]

Huckabee was born and raised in Hope, Arkansas into a working class family. He did not overlap with Bill Clinton (1946- ) who was also born in Hope but left as a small child. Huckabee in his early teens became a radio announcer and preacher. He attended nearby Oachita Baptist College (BA 1975), and studied theology at Southwestern Baptist Theological Seminary in Dallas, Texas (1976-80, no degree.) He was minister at Baptist churches in Pine Bluff and Texarkana, Arkansas in the 1980s, gaining fame for his preaching style and for his religious shows on television. He was elected in 1989 as president of the Arkansas Baptist Convention, with 490,000 members; he was elected as a moderate in opposition to the hardline conservatives.

Huckabee is married to Janet (née McCain) and has three children.

Huckabee perfected the shoestring operation. He raised only $2.3 million by Oct. 2007, less than 5% of the money of each main rival. He never had enough money to send advance teams to organize events or drum up crowds, nor could he afford fund-raising operations, private polls, big-name political consultants, or a staff of policy advisers and media experts. He relied on volunteers from churches and the home-school movement to schedule his events. The retail politics of the first states did not cost much. He won in Iowa by relying on his quick wit, fluent oratory, and in lieu of commercials, as many TV and radio talk-show appearances as he could schedule. To draw crowds his rallies featured actor Chuck Norris and his own playing the bass guitar with local rock bands. As the election calendar turned to larger states he lacked the cash to compete, so in late Jan. 2008 he cut back on Florida operations to concentrate on a few smaller, overlooked southern states on Feb. 5.[9]