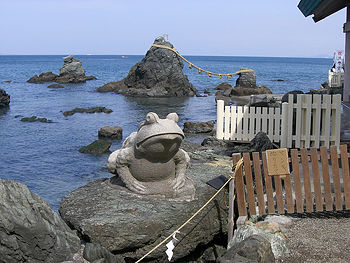 Mie prefecture (三重県 Mie-ken) is an area of Japan located in the Kansai region of Honshu island. Its population was 1,873,000 in 2006.[2] Mie is also sometimes placed in the Tokai (東海地方 Tookai-chihoo) sub-region of the Chubu area that includes the nearby city of Nagoya (名古屋).[3]

Although the capital is Tsu (津市 Tsu-shi), Mie's best-known city is Ise (伊勢市 Ise-shi), with its Shinto (神道 Shintoo) shrines; these are collectively referred to as the 'Ise Shrine' (伊勢神宮 Ise-jinguu) and are considered the centre of Japan's native religion. The 'Inner Shrine' (内宮 Naikuu) is actually located on the outskirts of the city, while the 'Outer Shrine' (外宮 Gekuu) is more central, near the railway station. The Inner Shrine is reputed to be home to the Yata no Kagami (八咫鏡), the 'Sacred Mirror' associated with the Japanese Imperial Family;[4] however, it is not possible to see this. Every twenty years, the shrine is pulled down so that the site can be ritually repurified; following this, a new shrine is built. This will occur for the sixty-second time in 2013.[5]

The prefecture also becomes the focus of international attention once a year when Suzuka 鈴鹿市 Suzuka-shi) hosts Formula One racing at the Suzuka Circuit (鈴鹿サーキット Suzuka Saakitto). 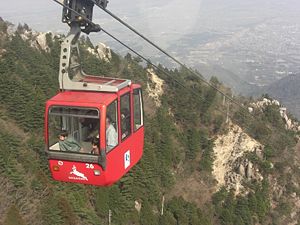 Cable cars are known as 'ropeways' in Japan. This one brings visitors from near Mie's Yunoyama Onsen station (湯の山温泉駅) towards the summit of Mount Gozaisho (御在所); a ski lift is available to reach the actual summit. 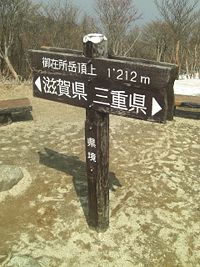 A sign marks one spot where Shiga and Mie prefectures meet, at the summit of Mount Gozaisho.