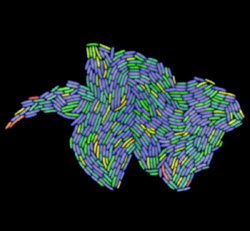 Microbiology is the study of microorganisms, which are unicellular or multi-cellular microscopic organisms and communities. This includes eukaryotes (with a nucleus) such as fungi and protists (protozoa), and prokaryotes (without a nucleus) such as bacteria and viruses (though viruses are usually classified differently to cellular living organisms).

Although much is now known in the field of microbiology, advances are being made regularly. The most common estimates suggest that we have studied only about 1% of all of the microbes in any given environment. Thus, despite the fact that over three hundred years have passed since the discovery of microbes, the field of microbiology is clearly in its infancy relative to other biological disciplines such as zoology, botany or even entomology, and new or emerging diseases such as HIV continually change the landscape of infectious disease.

Bacteria were first observed by Antonie van Leeuwenhoek in 1676 using a single-lens microscope of his own design. The name "bacterium" was introduced much later, by Ehrenberg in 1828, derived from the Greek word βακτηριον meaning "small stick". While Antonie van Leeuwenhoek is often cited as the first microbiologist, the first recorded microbiological observation, that of the fruiting bodies of molds, was made earlier in 1665 by Robert Hooke.

The field of bacteriology (later a subdiscipline of microbiology) is generally considered to have been founded by Ferdinand Cohn (1828-1898), a botanist whose studies on algae and photosynthetic bacteria led him to describe several bacteria including Bacillus and Beggiatoa. Ferdinand Cohn was also the first to formulate a scheme for the taxonomic classification of bacteria.

Louis Pasteur (1822-1895) and Robert Koch (1843-1910) were contemporaries of Cohn’s and are often considered to be the founders of medical microbiology. Pasteur is most famous for his series of experiments designed to disprove the then widely held theory of spontaneous generation, thereby solidifying microbiology’s identity as a biological science. Pasteur also designed methods for food preservation (pasteurization) and vaccines against several diseases such as anthrax, fowl cholera and rabies. Robert Koch is best known for his contributions to the germ theory of disease, proving that specific diseases were caused by specific pathogenic microorganisms. He developed a series of criteria that have become known as the Koch's postulates. Koch was one of the first scientists to focus on the isolation of bacteria in pure culture resulting in his description of several novel bacteria including Mycobacterium tuberculosis, the causative agent of tuberculosis.

While Louis Pasteur and Robert Koch are often considered the founders of microbiology, their work did not accurately reflect the true diversity of the microbial world because of their almost exclusive focus on microorganisms having medical relevance. It was not until the work of Martinus Beijerinck (1851-1931) and Sergei Winogradsky (1856-1953), the founders of general microbiology (an older term encompassing aspects of microbial physiology, diversity and ecology), that the true breadth of microbiology was revealed. Martinus Beijerinck made two major contributions to microbiology: the discovery of viruses and the development of enrichment culture techniques. While his work on the Tobacco Mosaic Virus established the basic principles of virology, it was his development of enrichment culturing that had the most immediate impact on microbiology by allowing for the cultivation of a wide range of microbes with wildly different physiologies. Sergei Winogradsky was the first to develop the concept of chemolithotrophy and to thereby reveal the essential role played by microorganisms in geochemical processes. He was responsible for the first isolation and description of both nitrifying and nitrogen-fixing bacteria.

The field of microbiology can be divided into several subtimes overlapping subdisciplines:

File:Samadams2.jpg
Fermenting tanks with yeast being used to brew beer

While microbes are often viewed negatively due to their association with many human illnesses, microbes are also responsible for many beneficial processes such as industrial fermentation (e.g. the production of alcohol, vitamins and dairy products), antibiotic production and as standard laboratory tools for genetic manipulation of higher organisms such as plants. Scientists have exploited their knowledge of microbes to produce biotechnologically important enzymes such as Taq polymerase, reporter genes for use in other genetic systems and novel molecular biology techniques such as the yeast two-hybrid system. Microbes play vital roles in geochemical cycles such as the Nitrogen-cycle.