Melanocortins are peptides derived from pro-opiomelanocortin (POMC), determined by tissue-specific post-translational cleavage. The regulation of appetite involves a complex interplay between circulating hormones, neurotransmitters, neuropeptides and nutrients, and the melanocortin system is an important component of this. [1][2][3][4][5][6] 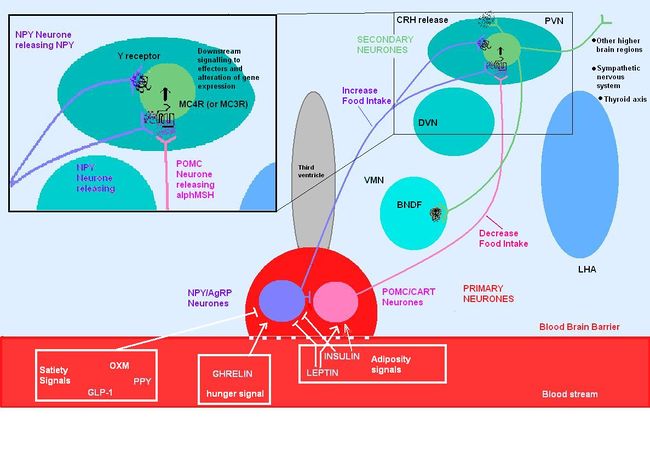 POMC is expressed in many tissues including the pituitary gland and the brain, and its products are involved in many different physiological processes. In the brain, POMC is expressed in the arcuate nucleus of the hypothalamus and the nucleus tractus solitarii (NTS) of the caudal brainstem, and products of POMC are important in appetite regulation. POMC was first noted for its importance in appetite and obesity in rodent studies. POMC-null mice exhibit hyperphagia and obesity. The suggestion that POMC has a role in appetite and energy balance is supported by studies on rare individuals with POMC mutations. In humans, a lack of POMC is generally fatal unless glucocorticoids are administered from birth as cortisol is essential for humans, but a few rare individuals with the mutation have shown very similar phenotype to the POMC knockout mouse. [7][8]

POMC expression in the arcuate nucleus is regulated by leptin, a hormone secreted by adipose tissue. Both the opioid peptide B endorphin and the melanocortin alpha-melanocyte stimulating hormone (α-MSH) are cleaved from POMC; α-MSH is a very potent inhibitor of feeding behaviour, but β endorphin increases feeding behaviour (especially of highly palatable foods). It is therefore important to explore how the prohormone may be processed in different tissues and what dictates this. In the same sense, how are the cleavage enzymes regulated to produce various concentrations of the different peptide hormones? In the brain, the actions of α-MSH are mediated via specific melanocortin receptors - particulary MC3 and MC4 receptors. These receptors are unusual in that they have both endogenous agonists and antagonists.

The central melanocortin system involves several agonists such as α, β, γ MSH and two inverse agonists, agouti and AgRP. These act on five subtypes of MC receptors (MCR1-5). [9] Of these, AgRP and α-MSH are thought to be most important for appetite regulation mainly via their actions on MC4 receptors. In addition to suppressing appetite, α-MSH increases both metabolism and body temperature. [10]Some MC4 receptors have been found on adipocytes, suggesting that circulating melanocortins may also be involved in regulating energy homeostasis.

(PD) Image: Jessica Ivy
The breakdown of POMC by prohormone convertase enzymes (PC1 and PC2) into melanocortins and B-endorphin

PC1 and PC2 are expressed in cells other than POMC cells and have important physiological functions other than POMC cleavage. For example, PC1 is essential for the biosynthesis of insulin and PC2 for the biosynthesis of glucagon. However, transgenic mice deficient in PC2 (PC2 'knockout' mice) exhibit no α-MSH expression at all, and Prader Willi patients have reduced hypothalamic PC2 expression. [12] The PC2 knockout mice are so defective in other ways that it is hard to tell whether the lack of alpha MSH has an effect.[13] Prader Willi sufferers exhibit an obese phenotype but again this syndrome comes as a result of a mutation of several genes so it cannot be inferred that PC2 mutation is solely responsible for the obese and hyperphagic phenotype.

Leptin-deficient mice show an upregulation of POMC and PC2 expression. 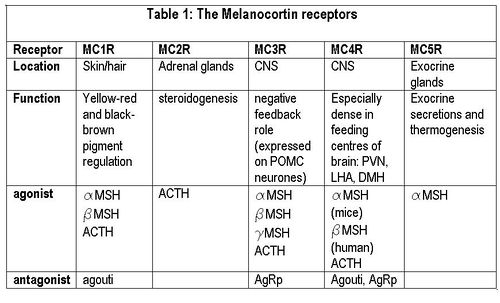 The melanocortin system encompasses a number of CNS circuits including

Although the melanocortin system is central to the regulatory mechanisms controlling appetite and satiety, the precise mechanism is not fully understood. Complexity arises from both the direct and indirect effects of a number of compounds including leptin, insulin, glucose, ghrelin, NPY, serotonin, peptide YY and endorphin.

Genetic mutations of the system, can result in individuals which are hyperphagic and consequentially obese. A number of mutations of this system have been identified in mice, all of which show a dysregulation in energy homeostasis. Many of the mutations discovered involve excess production of POMC antagonists, so that melanocortin agonists can’t bind to melanocortin receptors to suppress appetite.

Leptin secreted from adipose tissue and insulin secreted from the pancreas also regulate food intake, in part by their actions on the melanocortin systems. Excess adipose tissue (in obese individuals) results in an increase in leptin production, which normally induces a feeling of satiety, but excess production of NPY (as occurs in some mutations of the melancortin system), can suppress its effects. Similarly insulin levels show a marked increase in obese individuals, with hyperinsuliemia being one of the first metabolic disturbances identified in those obese subjects with mutations of the melanocortin system.

Insulin After a meal, there is a dramatic increase in insulin levels, some of which crosses the blood-brain barrier in a concentration that is representative of circulating insulin levels. Central administration of insulin acts on both NPY and POMC systems, and increases POMC mRNA synthesis as well as inhibiting food intake in fasting rats. Rats with untreated diabetes have a diminished amount of POMC mRNA, which is indicative of its involvement in stimulating its synthesis.

Thyroid hormone MC4R is expressed in a variety of neuronal cell types, including the thyrotropin-releasing hormone (TRH) neurones of the PVN, consistent with a role in metabolism and thus energy homeostasis. Inhibitory feedback from thyroxin's (T4) biologically active derivative triodothyronine (T3)is occurring at the MC4R [14].This incidentally alleviates inhibition of food intake and allows the activation of orexigenic pathways. The negative feedback is strongest in the brainstem region where it is thought to regulate meal size and thermogenesis.