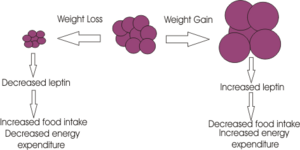 A major breakthrough in the study of appetite regulation came in 1994 when the research group led by molecular geneticist Jeffrey Friedman discovered the adiposity signal leptin.[1] [2] By studies of ob/ob mice, an inbred line of obese mice which were thought to lack a satiety signal, Friedman and colleagues found that the gene ob coded for a novel peptide hormone, which they called leptin, from the Greek ‘leptos’ meaning thin. Mice deficient in this gene are morbidly obese and this obesity can be reversed by giving the mice leptin.

Leptin is a peptide hormone secreted from adipocyte cells into the blood, and the plasma concentration of leptin is thus proportional to the total body fat mass. Leptin is transported into the brain from the blood, where it suppresses appetite by its effects on specific neurones in the brain that express leptin receptors; in particular on neurones of the arcuate nucleus and ventromedial nucleus of the hypothalamus.[3]

Unsurprisingly there was huge media interest in leptin as a possible treatment for obesity, and the biotechnology company Amgen paid $20 million to license leptin. However the results of clinical trials on obese people were disappointing. Most people are not obese because of a deficiency in leptin, but are just unable to respond to it; they had more fat cells and so more circulating leptin and as a result, reduced sensitivity of the leptin receptor. However, about 30% of the subjects lost weight and so may have low circulating levels of leptin. Potentially these might benefit from leptin therapy. The task now though is to identify people with an abnormally low circulating level of leptin.

The use of leptin as a drug has proved valuable in the disease lipodystrophy and in rare cases of people who have a defective leptin gene and so are constantly hungry.

The leptin receptor was identified in 1995 and is a member of the cytokine receptor family.[4] Several leptin receptors have been identified, all of which transmit their signal via the JAK-STAT pathway. The leptin receptor involved in regulating appetite is the receptor type Ob-Rb, which is present in many brain regions and especially in the hypothalamus. When leptin binds to the Ob-Rb receptor, the subsequent signalling cascade results in a decrease in appetite through inhibition of the production and release of neuropeptides involved in inducing orexigenic effects. Additionally the production and release of anorexigenic neuropeptides is stimulated.

1. Inhibiting appetite through its actions on the appetite-stimulating neuropeptide Y neurones and the appetite-inhibiting proopiomelanocortin (POMC) neurons, located in the arcuate nucleus. Leptin inhibits the NPY neurons,causing a decrease in the release of the inhibitory neurotransmitter GABA (which is synthesised by NPY neurons). This "disinhibits" the POMC neurons which increase their firing rate leading to the release of alpha MSH – a product of POMC which is a potent inhibitor of appetite. Leptin also acts directly on the POMC neurons.

Leptin is synthesised in many other tissues including the stomach, ovary, placenta and liver and its receptors are also located in a diverse range of tissues. It plays a role in many other physiological functions such as reproduction, where levels of leptin appear to dictate the commencement of menstruation and in foetal development where there is a surge in leptin levels in the first week of life, which does not correspond to a decrease in food intake but is thought to be a developmental signal. During development, mice deficient in leptin have disruptions in the arcuate nucleus neural projections, but not other hypothalamic projections, and these effects can be reversed upon leptin treatment.

Leptin also plays a role in other physiological processes. For example it can be thought of as a signal informing the body when it has sufficient fat to accommodate an ‘expensive’ physiological function like reproduction. Leptin therefore appears to protect the body against starvation by only allowing energy dense processes to occur when the body is sufficiently ready. Its primary role is complex, is it a satiety signal to prevent overeating or an evolutionarily efficient signal protecting against starvation?