The McCabe-Thiele method is a graphical approach, published by McCabe and Thiele in 1925, considered to be the simplest and most instructive method for the analysis of binary distillation.[1][2][3] This method uses the fact that the composition at each theoretical plate (or equilibrium stage) is completely determined by the mole fraction of one of the two components.

The McCabe-Thiele method is based on the assumption of constant molar overflow which requires that:

Construction and use of the McCabe-Thiele diagram

Before starting the construction and use of a McCabe-Thiele diagram for the distillation of a binary feed, the vapor-liquid equilibrium (VLE) data must be obtained for the lower-boiling component of the feed. 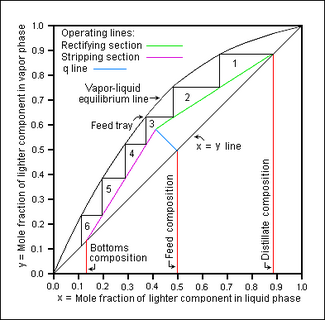 The next step is to draw a straight 45 degree line from the point where x and y both equal 0.0 to the point where x and y both equal 1.0, which is the x = y line in Figure 1. Then draw the equilibrium line (also seen in Figure 1) using the VLE data points of the lower boiling component, representing the equilibrium vapor phase compositions for each value of liquid phase composition. Also draw the vertical red lines (from the horizontal axis up to the x = y line) for the feed and for the desired compositions of the top distillate product and the corresponding bottoms product. 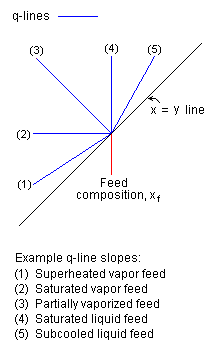 The next step is to draw the blue q-line (seen in Figure 1) from the x = y line so that it intersects the rectifying operating line.

Some example q-line slopes are presented in Figure 2. As can be seen now, the typical McCabe-Thiele diagram in Figure 1 uses a q-line representing a partially vaporized feed.

Note that using colored lines is not required and only used here to make the methodology easier to describe.

In continuous distillation with varying reflux ratio, the mole fraction of the lighter component in the top part of the distillation column will decrease as the reflux ratio decreases. Each new reflux ratio will alter the slope of the rectifying section operating line.

When the assumption of constant molar overflow is not valid, the operating lines will not be straight. Using mass and enthalpy balances in addition to vapor-liquid equilibrium data and enthalpy-concentration data, operating lines can be constructed based on Ponchon-Savarit's method.[4]