From Citizendium
(Redirected from Maritime Commission)
Jump to: navigation, search 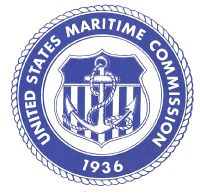 The United States Maritime Commission (MARCOM) was an independent executive agency of the United States government, in existence from 1936-1950. From 1939 through the end of World War II, MARCOM funded and administered the largest and most successful merchant shipbuilding program in American history, building almost 6,000 ships.

MARCOM replaced the U.S. Shipping Board via the Merchant Marine Act of 1936, passed by Congress on June 29, 1936. Its original aim was to modernize the U.S. merchant marine. It was expected to achieve this aim by providing financial subsidies to U.S. shipbuilding and ship operating companies, in order that they could compete with their foreign equivalents.

By 1939, the Commission adopted a new role--building merchant ships to replace those lost to German submarines in the runup to World War II. This role continued through the war, and was significantly expanded several times. By the war's end, U.S. shipyards produced 5,777 ships with MARCOM financing and direction. Most of these ships were specific types, built to one of several standard plans. These included Liberty Ships (2,708 ships), Victory Ships (414 ships), and others, notably type C1, C2, and C3 dry cargo ships (541 ships), and type T1, T2, and T3 tankers (705 ships). Many ships laid down as C2's or C3's were converted to Navy warships (682 ships), notably attack cargo ships, attack transports, and escort aircraft carriers.

MARCOM was abolished on 24 May 1950, and its functions were split between the U.S. Federal Maritime Board which was responsible for regulating shipping and awarding subsidies for construction and operation of merchant vessels, and the United States Maritime Administration, which was responsible for administering subsidy programs, maintaining the national defense reserve merchant fleet, and operating the U.S. Merchant Marine Academy.

Responsibility for U.S. merchant shipping has been held by many agencies since 1917. For a history, see United States Shipping Board.