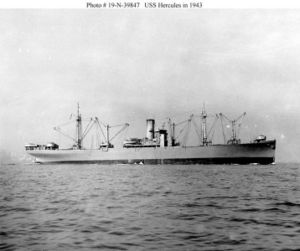 Type C3 ships were the third type of cargo ship designed by the United States Maritime Commission (MARCOM) in the late 1930's. A total of 465 of these ships were built between 1939 and 1947; none are still in service. As it had done with the Type C2 ships, MARCOM circulated preliminary plans for comment, and altered the design based on the comments it received.

The C3 was larger and faster than its C2 predecessor, measuring 492 feet from stem to stern (vs. 459 for the C2), and designed to make 16.5 knots (vs. 15.5 for the C2). Like the C2, it had five cargo holds. The ship was not specific to any service or trade route, but was a general purpose ship that could be modified for specific uses.

During World War II, many C3 ships were converted to naval uses, particularly as escort aircraft carriers (CVE)s and as tenders for destroyers, submarines and seaplanes.