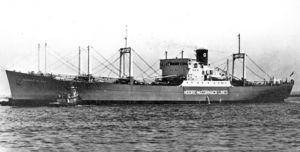 The Donald McKay, the first C2 ship to be completed. She was later taken over by the U.S. Navy and renamed USS Polaris (AF-11).

Type C2 ships were merchant ships designed by the United States Maritime Commission (MARCOM) in 1937-38. From 1939-1945, U.S. shipyards built 173 of them; none are still in service. The C2's were all-purpose cargo ships with five holds, and compared to ships built before 1939, they were remarkable for their speed and fuel economy. Their design speed was 15.5 knots, but some could make 19 knots on occasion. The first C2's were 459 feet long, 63 feet broad, and 40 feet deep, with a 25 foot draft. Later ships varied somewhat in size.

In 1937, MARCOM distributed tentative designs for criticism by shipbuilders, ship owners and naval architects. The final designs incorporated many changes suggested by these constituencies. The ships were to be reasonably fast but economical cargo ships which, with some government subsidies to operators, could compete with vessels of other nations. Building costs were to be minimized by standardization of design and equipment, and the ships were to have sufficient speed and stability that they could be used as naval auxiliaries in time of national emergency.

The basic specifications called for a steel cargo ship with raked stem and cruiser stern, complete shelter and second decks, and a third deck in Nos. 1-4 holds. Dimensions of the hatches were 20 ft x 30 ft, except for No. 2, which was 20 ft x 50 ft, allowing such cargo as locomotives, naval guns, long bars, etc. Ventilation to the holds was provided by hollow kingposts, which also served as cargo masts. Cargo handling gear consisted of fourteen 5-ton cargo booms, plus two 30-ton booms at Nos 3 and 4 hatches.

The ships could be powered either by steam turbines or diesel engines. The steam version had a high speed compound double reduction geared turbine developing 6,000 shaft horsepower.

Many C2 ships continued in naval or commercial service until the late 1960's and early 1970's.