Attack cargo ships were WWII-era U.S. Navy ships designed specifically to carry heavy equipment, supplies and troops in support of amphibious assaults; they were armed for self-defense.. Their naval ship designation was AKA, which were optimized to land cargo and also troops, rather than troops with some cargo, the mission of the counterpartAttack Personnel Transport Ship (APA)[1] During WWII, 108 AKAs, of several classes, but all were of roughly similar size and capability. In 1969, the Navy redesignated all remaining AKAs as LKA, and renamed the type as amphibious cargo ship. The last ship of this type was removed from service in 1994; this generation of amphibious ship loaded landing craft, that were then hoisted from the side of the ship into the water, a technique now obsolete. 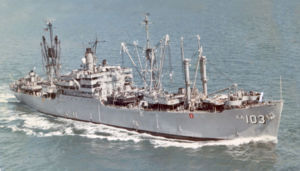 Attack Cargo Ship USS Rankin (AKA-103)
The biggest difference between these ships and other cargo ships was their ability to carry and handle large numbers of landing craft. They were also faster, had more armament, and had larger hatches and booms. Their holds were optimized for combat loading, a method of cargo storage where the items first needed ashore were at the top of the hold, and those needed later were lower down. Because these ships went into into forward combat areas, they had Combat Information Centers and significant amounts of equipment for radio communication, neither of which were present in other cargo ships.

The need for ships of this type became apparent during World War II, when amphibious warfare doctrine underwent a period of rapid development as Japanese strongholds in the Pacific were invaded from the sea. Planners saw the need for a special kind of cargo ship—one that could carry both cargo and the LCM and LCVP boats with which to deliver it to the beach, and that carried guns to assist in air defense and shore bombardment. Specifications were drawn up, and beginning in early 1943, the first 16 U.S. Attack Cargo Ships were converted from Navy cargo ships that had previously been designated AK.

Six new AKAs were built during 1943, 41 during 1944, and 45 during 1946. A new attack cargo ship was commissioned an average of every nine days during the latter two years. Construction stopped at the end of the war, 108 AKAs having been built or converted during its duration.

Attack cargo ships played a vital role in the Pacific War, where many were attacked by kamikazes and other aircraft, and several were torpedoed, but none were sunk or otherwise destroyed. Nine AKA's were present at the surrender ceremony in Tokyo Bay on 2 September 1945: USS Libra (AKA-12), USS Medea (AKA-31), USS Pamina (AKA-34), USS Sirona (AKA-43), USS Skagit (AKA-105), USS Todd (AKA-71), USS Tolland (AKA-64), USS Whiteside (AKA-90), and USS Yancey (AKA-93).

Within a year of the war's end, 70 of the 108 AKAs had been decommissioned and either sold or put into the National Defense Reserve Fleet. Eight others were converted to ships of different types such as ammunition ships, oceanographic survey ships, repair ships, or cable layers.

Ten of the reserve ships were recommissioned for service in the Korean War. One AKA, USS Tulare (AKA-112), somewhat larger than her predecessors, was built and commissioned in 1954. She and some of the WWII AKAs saw service in Vietnam. Several of the AKAs, most notably USS Arneb (AKA-53), saw service in establishing and maintaining U.S. bases in Antarctica.

Five more amphibious cargo ships, much larger and of a completely new design, were built between 1968 and 1970.

In 1969, the U.S. Navy redesignated all its AKA attack cargo ships as LKA amphibious cargo ships. At the same time, the other "A" designations of amphibious ships were changed to similar "L" designations. For example, the all the APAs were redesignated as LPAs. The remaining WWII AKA/LKAs were decommissioned shortly thereafter, the last one finally being taken from service in 1971.

In the mid 1990s, both the United States Navy and the Royal Navy developed amphibious transport docks which took on this unique amphibious role. The last amphibious cargo ship in the U. S. Navy, USS El Paso (LKA-117), was decommissioned in April, 1994.

The Artemis-class ships were built by Walsh-Kaiser Co., Inc. of Providence, R.I., during World War II. Compared to other classes of AKA's, they had a much shallower draft, a lower main deck aft, and a different propulsion system.

The Charleston-class ships were built by Newport News Shipbuilding and Drydock Co. in 1968 and 1969. They were among the first Navy ships to have a fully automated main propulsion plant. The assigned mission of the amphibious cargo ship was to transport and land combat equipment and material with attendant personnel in an amphibious assault. To optimize their capability for combat loading, they provided considerable flexibility in cargo stowage methods. The cargo elevators servicing holds 1, 3, and 4 make all categories of supplies and all levels available simultaneously to either the main deck or the helicopter platform. Use of the ship's forklifts and pallet transporters speed the maneuvering of cargo in the holds and enable delivery to various debarkation stations via the main deck passageways, which run the length of the ship. The arrangement and quantity of booms and cargo elevators make it possible to simultaneously embark/debark vehicles and cargo.

Vehicles in upper stowage spaces can be embarked/debarked through the hatches with cargo booms, while pallets are embarked/debarked in lower stowage spaces by elevators. The main deck hatch of hold 2 is unobstructed and can be opened for embarking/debarking of vehicles without the delay of unloading landing craft stowed on the hatch. Hold 4 is well suited for high priority cargo because of its direct access to the flight deck or main deck via elevator number 5.

Built in the late 1960s, these ships participated in the Vietnam War. Four of the five ships in the class had been transferred to the reserve fleet in the late 1970s and early 1980s. The need for additional sealift capacity resulted in all four being returned to the active fleet in 1982. The lead ship of the class, Charleston was decommissioned in 1992, and was joined by St. Louis in November of 1992. The remaining ships were decommissioned in 1994. All ships are mothballed for possible activation in the future.

Typically an AKA or LKA was commanded by a U.S. Navy Captain, with a Commander as executive officer and Lieutanants as department heads. The initial commanding officers of the WWII AKAs were often Lieutenant Commanders, with Lieutenants as execs. Several of the WWII AKAs were manned by officers and men of the U.S. Coast Guard. Starting in the 1950s, the Navy often assigned senior Captains to command AKAs as a step toward promotion to flag rank.

Each ship's complement consisted of enough officers and enlisted men to man the ship fully during combat operations. Other than during combat, and even then sometimes, the ships got by with less than their full complement. When loaded for a landing, each AKA also carried the troops and officers associated with the tanks and other equipment that made up her cargo; sometimes AKAs also carried underwater demolition teams and similar forces.

WWII AKAs were armed to provide both naval gunfire support and antiaircraft defense. All were equipped with one 5"-38 caliber gun, which by 1944 was recognized as the best gun for this dual role. All eventually had twin 40mm-56 caliber Bofors antiaircraft guns]], which were seen as the best for that purpose. Early on, most WWII AKAs also had 20mm Oerlikon (autocannon) as antiaircraft guns, but these came to be seen as having limited value, and were eventually phased out. It is not clear just when this happened, but they were removed from at least one AKA at the time of her recommissionning in 1952.

The earliest AKAs were individually converted from existing merchant ships. Later ones were specifically built to be AKAs, in several different classes; ships of a given class were built on the same standard hull design.