Due to technical limitations, this article uses an unusual title. It should be called  40mm/56 caliber gun. 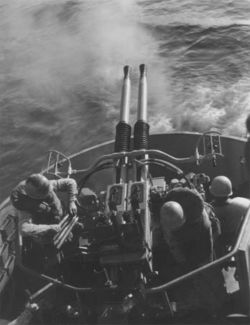 40mm twin mount aboard USS Rankin (AKA-103) in 1959
The 40mm/56 caliber gun was a piece of anti-aircraft artillery (AAA) gun used on almost every major U.S. and U.K. warship of World War II. It was regarded as a vast improvement over the previous 1.1-inch antiaircraft weapon, and probably ranks as the most efficient close-in air defense weapon on any warship during WWII.