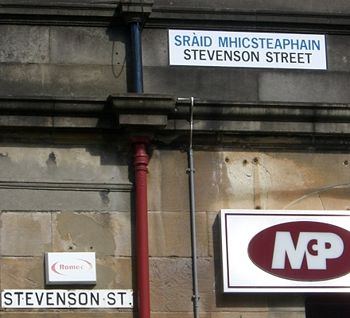 Newer streets signs in parts of western Scotland display names in Scottish Gaelic above English - older signs are in English only. This promotion of Gaelic is an example of status planning - i.e. political intervention to promote or restrict official recognition of a language - and linguistic pluralism, where more than one language is recognised in society.

Language planning refers to any political attempt to change the status of a language in some way or develop new ways of using it. This often involves a state, government or other elite group devising laws to promote or proscribe a language, which are then implemented in a variety of ways. Alternatively, scholars or politicians may produce guides for using the language, such as an official dictionary or grammar book.

In sociolinguistics, language planning is divided into at least two types, status planning and corpus planning. The former involves changing the political recognition of a language - by making it an official language of a country, for example, or banning it altogether. Various degrees of recognition are possible, reflecting how the language is used in society. While the language(s) of government are very likely to be protected in law, the linguistic rights of a minority speech community - a group of people who share a common way of speaking - may be more limited. Corpus planning, meanwhile, involves changing the way a language is used - perhaps by devising a written form of the language, or developing a literature.[1]

Different ways of thinking (ideologies) may determine how a language is managed in a society. Status or corpus planning may be implemented in several ways, according to the predominant beliefs of decision-makers. For example, a policy of internationalisation may involve a non-indigenous language being made 'official', e.g. as a lingua franca to communicate with foreign countries or between groups within the country. An example of this is English in Singapore, where it became necessary for indigenous and immigrant groups of diverse linguistic origins to find a common language. Related to this is what can be called vernacularisation, where an indigenous language is standardised and made 'official'. This happened in Indonesia, where Bahasa Indonesia is the official language. In other cases, states may adopt policies of linguistic pluralism or linguistic assimilation - pluralism meaning that several languages enjoy equality or various degrees of recognition, such as German, French, Italian and Romansh in Switzerland, and assimilation meaning that one or few languages have any recognition; others may be suppressed. Examples of this include measures to promote French in France, while minority languages such as Occitan go unrecognised, and the status of Kurdish in Turkey, whose speakers were granted the right to some public use of the language in 2002.[2]