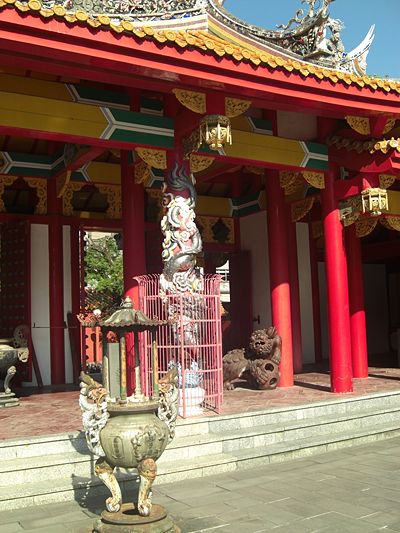 Koshi-byo in Nagasaki is a little piece of China in Japan.

Koshi-byo (孔子廟[1] Kooshi-byoo) in Nagasaki, Japan, is a Confucius shrine in the south of the city. It is the only one built by and for Chinese people outside China, using materials imported from their homeland. The shrine is decorated in red and gold, with white marble flagstones, in contrast to more sober Japanese decoration, and the grounds also house a museum of Chinese culture.

The shrine was originally built in 1893, and was badly damaged in the 1945 atomic bombing of Nagasaki. An extensive renovation saw the introduction of the present decoration, including the installation of 72 statues, each one unique, depicting Confucius's disciples. A statue also stands in his commemoration. The shrine museum houses many treasures, including two terracotta warriors and a stone horse from Xi'an.

The shrine is also notable as sovereign territory of the People's Republic of China, administered by its embassy in Tokyo. The staff include both Japanese and Chinese employees. Covering an area of about one city block, it is the only piece of Chinese territory surrounded on all sides by another state. It is also the only one where the currency is not Chinese: to pay the entrance fee and buy drinks from the shrine's vending machines, Japanese yen must be used. Furthermore, the working language is Japanese: although museum exhibit labels are given in Mandarin and English as well, the descriptions themselves are only in Japanese. Finally, this is the only place in the world where foreign visitors can legally enter the People's Republic of China without presenting a passport. Obviously, the only feasible way to do so is to first enter Japan.