Korematsu v. United States was one of four United States Supreme Court cases that dealt with the constitutionality of the Japanese internment during World War II.[1] In its December 18, 1944 decision to uphold the internment, the Court argued forcefully that military necessity legitimates expansive federal government war powers, including those that curtail the civil liberties of specific racial groups. 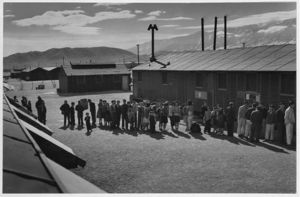 An internment camp in California

The December 7, 1941 attack by Japan on Pearl Harbor prompted widespread concern about the security of the United States' West Coast and the possibility of espionnage by members of its large Japanese-American population. On February 19, 1942, President Franklin D. Roosevelt responded by issuing Executive Order 9066 (EO 9066]], which authorized the Secretary of War and his designated commanders to establish "military areas" as they see fit and exclude "any or all persons" from entering or remaining within them.[2] The main result of Roosevelt's order was the relocation of more than 100,000 Americans of Japanese descent from the West Coast into internment camps in the interior of the United States. A month later, Congress passed Public Law 503, which criminalized violations of military orders issued as a result of EO 9066.

Facts of the case

Persuant to EO 9066, on May 3, 1942, the U.S. army issued Civilian Exclusion Order Number 34, which instructed all persons of Japanese ancestry living in San Leandro, California to evacuate the area by the end of that week. Fred Korematsu, a California-born American citizen whose parents had emigrated from Japan in 1905, refused to comply with the exclusion order.

Korematsu was apprehended on May 30, 1942 and subsequently tried and found to be in violation of Public Law 503 by the Federal District Court for Northern California. The Ninth Circuit Court of Appeals upheld the district court ruling. Korematsu appealed to the U.S. Supreme Court, which granted certiorari on March 27, 1944. Oral arguments were heard on October 11, 1944.

On December 18, 1944, the Supreme Court ruled, 6-3, to affirm the lower courts' decisions and uphold the Japanese internment as a constitutional exercise of executive and legislative power.

Opinion of the Court

Justice Hugo Black wrote the opinion of the Court, which acknowledged at the outset that "all legal restrictions which curtail the civil rights of a single racial group are immediately suspect,"[3] but concluded that "to cast this case into outlines of racial prejudice, without reference to the real military dangers which were presented, merely confuses the issue."[4]

To arrive at this conclusion, the opinion relied heavily upon the ruling in a previous case, Hirabayashi v. United States,[5] which challenged a curfew order that had been issued persuant to EO 9066. As in Hirabayashi, the Court maintained that it had no basis for rejecting military officials' determination that the exclusion order Korematsu was contesting was necessary due to the impossibility of quickly identifying and detaining disloyal individuals within the broader, and presumably largely loyal, Japanese-American community. To bolster this point, Black cited a number of congressional hearings in which the refusal of several thousand Japanese-Americans to take an oath of unqualified allegiance to the United States and requests for repatriation to Japan served as evidence that there existed at least some individuals within the Japanese-American community who posed a national security threat due to their loyalty to Japan.

The opinion also rejected the possibility that there had been two conflicting orders in play on the day that Korematsu was apprehended, and that he could not therefore be convicted for failing to heed the exclusion order. That is, while Public Proclamation No. 4 of March 27, 1942 had indeed stipulated that no Japanese-American leave the designated military area, such emigration was restricted only "until and to the extent that a future proclamation or order should so permit or direct."[6] Exclusion Order No. 34 constituted just such a "future order"; as such, its requirement that Korematsu leave San Leandro overrode rather than contradicted Proclamation No. 4's requirement that he stay put.

Black further contended that, despite Korematsu's argument that the exclusion order must be considered as part and parcel of the government's entire relocation program, the exclusion order and the subsequent detentions were in fact two distinct policies, the constitutionality of which was to be evaluated separately. Thus, while the decision likened Korematsu's exclusion order to the curfew order that was contested in Hirabayashi, it contrasted it to the detention policy that was challenged in a third Japanese internment case that was decided the same day, Ex Parte Endo.[7]

The opinion of the Court wraps up by confronting the objection that Korematsu centered on a "case of imprisonment of a citizen in a concentration camp solely because of his ancestry,"[8] which Justice Roberts raised in his dissenting opinion. Black eschewed the concentration camp appellation "with all the ugly connotations that term implies"[9] and reiterated that the case dealt only with an exclusion order that was entirely justified due to military necessity:

Korematsu was not excluded from the Military Area because of hostility to him or his race. He was excluded because we are at war with the Japanese Empire, because the properly constituted military authorities feared an invasion of our West Coast and felt constrained to take proper security measures, because they decided that the military urgency of the situation demanded that all citizens of Japanese ancestry be segregated from the West Coast temporarily, and, finally, because Congress, reposing its confidence in this time of war in our military leaders -- as inevitably it must -- determined that they should have the power to do just this.[10]

Justice Felix Frankfurter authored a short concurring opinion, which, as was Frankfurter's want, made a stand for judicial restraint: "To find that the Constitution does not forbid the military measures now complained of does not carry with it approval of that which Congress and the Executive did. That is their business, not ours."[11]

Justice Roberts disagreed with the Court's reliance on the Hirabayashi precedent, arguing that the facts of Korematsu's case suggest that the exclusion order he violated must be viewed as part and parcel of "an over-all plan for forceable detention."[12] He also expounded upon the catch-22 created for Korematsu by the conflicting Proclamation No. 4 and exclusion orders:

The two conflicting orders, one which commanded him to stay and the other which commanded him to go, were nothing but a cleverly devised trap to accomplish the real purpose of the military authority, which was to lock him up in a concentration camp. The only course by which the petitioner could avoid arrest and prosecution was to go to that camp according to instructions to be given him when he reported at a Civil Control Center.[13]

In other words, Korematsu's only non-criminal avenue for challenging his exclusion from San Leandro would have been to report for relocation to an internment camp and, once there, petition for a writ of habeas corpus, as had been done in the Endo case.

Justice Murphy's dissent, which opened with the assertion that the wartime exclusion of Japanese-Americans from the West Coast exceeded the bounds of constitutional power and fell into "the ugly abyss of racism" and closed by reiterating his view that the opinion of the Court amounted to a "legalization of racism",[14] was especially scathing. To defend this stance, he first invoked a long-standing judicial standard for determining when the government can rightfully deprive citizens of civil liberties on military necessity grounds, namely that the public danger must be "so 'immediate, imminent, and impending' as not to admit of delay and not to permit the intervention of ordinary constitutional processes to alleviate the danger."[15] In his view, Exclusion Order No. 34 did not meet this standard and amounted to a sweeping deprivation of the Constitution's equal protection and due process guarantees. As evidence that the exclusion order was driven more by racism than military necessity, he cited Lieutenant General John DeWitt's Final Report: Japanese Evacuation from the West Coast, which, Murphy maintained, included an unsubstantiated "blanket condemnation of all persons of Japanese descent."[16] Murphy also rejected the argument, proffered in both DeWitt's Final Report and the opinion of the Court, that the need for swift action made it unfeasible to root out disloyal individuals instead of relocating all Japanese-Americans from the West Coast regardless of their loyalty. Rather, he maintained, it took more than four months from the United States's entry into the war to issue the first exclusion order and nearly eleven months to fully execute the evacuation; what's more, the fact that martial law wasn't declared suggests that the situation was not nearly so urgent as supporters of the Japanese internment policy made it out to be.

Finally, Justice Jackson took issue with what he perceived to be the Court's decision to "distort the Constitution to approve all that the military may deem expedient."[17] In his view, the military's exclusion order, while overtly inimical to liberty, was less subversive to it than the judiciary's efforts to reconcile it with the Constitution and, consequently, establish it as a precedent for allowing future racially discriminatory deprivations of civil rights and liberties. This possibility, he went on to argue, was demonstrated in the opinion of the Court itself, which based its affirmation of Exclusion Order No. 34 on its determination in Hirabayashi that a similar curfew order was constitutional. He concluded, therefore, that "a civil court cannot be made to enforce an order which violates constitutional limitations even if it is a reasonable exercise of military authority."[18]

As a result of the Court's ruling, Korematsu's conviction was affirmed and remained on the books until the 1980s. In 1982, a writ of coram nobis petition was advanced on his behalf. The case was argued before the Northern California Federal District Court in November 1983 and, on April 19, 1984, Judge Marilyn Patel ruled to vacate his conviction.[19] Then, in 1998, Korematsu was awarded the Presidential Medal of Freedom. At the White House ceremony, President Bill Clinton likened him to Homer Plessy, Oliver Brown, and Rosa Parks, three African Americans whose defiance of segregationist policies are widely acknowledged milestones in the United States' "constant search for justice."[20]

In 2003, Korematsu filed an amicus curiae brief in three cases dealing with Guantanamo detainees: Rasul v. Bush, Hamdi v. Rumsfeld, and Al Odah v. United States. In his amicus brief, Korematsu called upon the Supreme Court to avoid repeating past mistakes and "protect constitutional rights when they matter most, rather than belatedly, years after the fact."[21]

Despite Justice Jackson's prognostication, the Korematsu ruling has had very little impact as a legal precedent. As Law Professor Michael J. Gerhardt describes, the case is "symbolic, like Dred Scott, of the Court's failings" and "almost universally condemned," even to the extent that "just as affirming Brown is now required in judicial confirmation proceedings, rejecting Korematsu is pro forma for Supreme Court nominees."[22] Nevertheless, the Court has cited the opinion's assertion that policies involving racial classifications are subject to strict scrutiny in Adarand v. Pena, a 1995 case dealing with affirmative action.[23] In another sense, the Korematsu case illustrates the fragility of the concept of Citizenship in the United States, since approximately 60% of the detainees had been technically citizens with documents to prove it, but citizenship was not as important as racial characteristics and perceived loyalties (see History of U.S. citizenship for more information.)