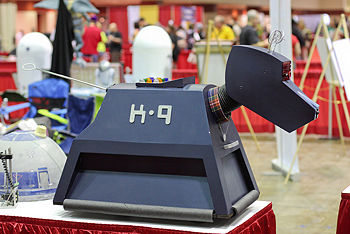 (CC) Photo: Sam Howzit
K-9 as he appeared in Doctor Who.

K-9 is a fictional robot dog who first appeared in the British science-fiction television series Doctor Who and subsequently in several spin-off programmes. K-9 was created by Bob Baker and Dave Martin, mainly voiced by John Leeson and built by Mat Irvine.

K-9 was originally envisaged as a one-off character in a Doctor Who story set in the distant future, 'The Invisible Enemy' (1977). This was a studio-bound production and so K-9's design reflected the assumption that the radio-controlled prop would never have to deal with anything more than challenging than a flat studio floor. However, the programme-makers decided to keep K-9 on as a robotic companion to the series's main character, the time traveller known only as 'the Doctor'. The machine would subsequently be tested beyond its limits, whether out on location (often running on cleverly-hidden boards) or supposedly navigating stairs (which K-9 would conveniently attempt only off-screen). Later, K-9's insides would be rebuilt to cope with these more challenging environments.

K-9 rapidly became a firm favourite with the younger members of the Doctor Who audience, but had a mixed reception from older fans and was disliked by some members of the cast and crew because of the technical difficulties of working with the K-9 prop. Conversations between Tom Baker's Doctor and K-9 would often involve Baker crouching by the dog, leading to the actor complaining that it gave him "housemaid's knee". To save the cast's backs, a second K-9 prop, empty of machinery, was used when the script called for characters to manhandle the dog. The radio-controlled electronics of the actual K-9 prop also interfered with studio cameras, and likewise nearby equipment would disrupt the radio signals, causing it to go haywire and crash into things. The earliest robot, prior to some internal reworking, was also quite noisy. Much more popular with the production team was John Leeson, who would not only voice K-9 but get down on his hands and knees in rehearsals so that the actors had someone to play against. As Leeson was a former quiz show question-setter, he also competed with Baker over newspaper crosswords during breaks.

Although there were only two actual K-9 props, only one of which was functional, in the stories themselves there were actually four separate robot dogs, labelled from 'Mark I' through to 'Mark IV'. The original robot was built a lonely professor of the future as a substitute for a real dog. This version appeared for one season of the series, before being left behind on the Doctor's home planet, Gallifrey. The Doctor would build a replacement K-9, which appeared very similar to the original (of course, in real life, the same props were used, albeit with fresh coats of paint), but could respond to a silent dog whistle. Like the first K-9, the Mark II had a laser in its nose that could be used to stun adversaries; memorably, K-9 used it to defeat a robotic parrot in a pirate-themed story penned by Douglas Adams.

K-9 Mark II appeared in three seasons of Doctor Who, departing in 1980 in a story which saw a damaged K-9 forced to remain in another universe. In real life, the dog's days were also numbered. A new production team headed by John Nathan-Turner were determined to bring in more scientifically realistic adventures, and a slightly comedic robot dog did not fit the new brief. Leeson, who had returned to the series after a year during which K-9 had been voiced by David Brierley, later recalled that several scripts included an option to write K-9 out: "There were several attempts on his life." One of these occurred in the opening moments of the 1980 season; episode one of 'The Leisure Hive' saw K-9 badly damaged by seawater while attempting to retrieve a ball on Brighton beach. However, K-9 would be granted a stay of execution for a few more stories, and soon after leaving Doctor Who, was called back for a spin-off show.

The 1981 pilot episode of K-9 and Company, subtitled A Girl's Best Friend, featured K-9 Mark III, again voiced by Leeson. A 50-minute tale of witchcraft in an English village, K-9 appeared as a gift from the Doctor to his former companion, Sarah Jane Smith (played by Elisabeth Sladen). Despite the popularity of K-9, the series was not picked up, and only one episode was ever made. K-9 Mark III made a cameo in Doctor Who for the show's twentieth anniversary special, but otherwise appearances became few and far between. However, Sarah Jane Smith and K-9 did return for an episode of the revived series of Doctor Who in 2006, one which saw the destruction of the Mark III version and its resurrection as a new and improved Mark IV. This led to a spin-off series, The Sarah Jane Adventures, in which K-9 would make increasingly frequent appearances.

Separately from the BBC, Bob Baker had also developed his own K-9 television series, as a UK-Australia co-production that would first air in 2010. This saw the return of K-9 Mark I, 'regenerated' into a 21st-century form. K-9 has also appeared in various other programmes over the years, including a Doctor-Who-themed edition of the quiz show The Weakest Link in 2007. K-9 was first to be eliminated from the contest despite John Leeson answering all the questions correctly, when other Doctor Who stalwarts unanimously voted him off.