Joan of Arc, memory of 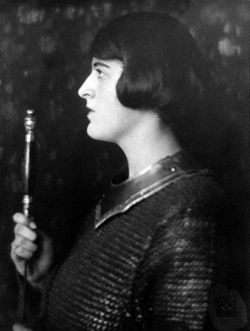 Madame Pauline Vanier, Companion of the Order of Canada, dressed as Joan of Arc, circa 1920. Many women in modern times have taken Joan as a role model, and sometimes demonstrated their feeling by dressing as Joan in plays, photographs, and tableaux vivants. Photo by Sidney Carter / Library and Archives Canada

Among the many important figures of history, some few stand out as transcending the accidents of their time and place. The young 15th century French peasant girl, known to history as Joan of Arc, who led her nation's armies to victory in the later stages of the Hundred Years' War and became a French national heroine, is one such.

In Joan's case, although she has become a French national heroine, she has also become a heroine to many people of other nationalities. And although she was a pious and devout Catholic (and, since 1920, a recognized Saint within the Catholic Church), she has become an inspiration to many people of other faiths and, not only people of faith, but atheists and agnostics as well. And although very much a child of the 15th century, into which she was born, she has remained an inspiration over the centuries since.

Belonging to all people, all times, and all religions, the transcendent figures of history possess two biographies. First, there is the record of their lives and deeds. In Joan's case, the documentary sources for this are voluminous, especially when one considers the fact that she lived in the years before the printing press and widespread literacy, and was also young, female, and not of noble class.

But beyond Joan's actual life, there is a second biography, and that is the record of how men and women of subsequent ages have viewed her as seen in literature, drama, folklore, and other media and forms. The story of Joan of Arc, as seen by her viewers and storytellers, is the subject of this article.

Joan as a religious phenomenon - Saint or sinner?

In the 15th century, when considering the phenomenon of one, such as Joan, who claimed to hear voices or see visions beyond the ken of those around her, the principal means of attempting to comprehend such unusual occurrences was religious and recourse was had to trained clerics who were considered the experts of the day in examining such matters.

An examination by clerics at Poitier which took place soon after Joan first met with the Dauphin resulted in a pronouncement that the examiners could find no wrong with her. The full report of this examination is lost to history. Subsequently, two major legal processes were held which resulted in opposite conclusions - one that she was a heretic, for which she was burnt, and the other setting aside that verdict and, 500 years later, declaring Joan to be a Saint.

One of the most well known facts about Joan of Arc is that she is a Saint of the Roman Catholic Church. The formal process of canonization, which had been initiated a little over a half century earlier, was completed in 1920 when Pope Benedict XV declared her to be a Saint of the Church. Thus the debate within the Church over the meaning of Joan's life, begun during her life in the 15th century, was brought to a close after nearly 500 years.

That debate had begun the moment Joan stepped onto the stage of world history in 1429 when she led French forces in triumph at Orleans. For the Church of the time, heavily involved as it was in worldy affairs, and being the human institution that it was, shared the divisions of that worldly society. The Church, in short, was as divided and conflicted about the meaning of Joan as was the world around it.

This division was most obviously manifest in the two "Trials" which have ever since defined her in both life and death. In the first of these Trials, that which has become known as the Trial of Condemnation, Joan, a prisoner in the hands of the English whom she had defeated in battle, was declared by a Church court which tried her, in a political trial masquerading as a religious one, to be a heretic and was burnt at the stake.

Later, while Joan was still within the living memory of those who knew her and fought with her, another Church process, in a series of hearings now known as the Rehabilitation trial of Joan of Arc, declared the verdict of the first Church trial to be null and void, and set it aside. Many modern historians consider that the second Trial was no less politically motivated than was the first, since its protagonists had their own worldly reasons for challenging the original verdict.

Since the original verdict was not reversed, but only set aside (as the Devil's Advocates in Joan's canonization hearings would want to point out), this left open the question of the final judgment of that Church. But that process was brought to an end in 1920 with Joan's canonization, and since that time the cult of Joan within the Catholic Church has been strong.

Harlot of the Armagnacs

If the Nullification Trial formed the basis for eventually viewing Joan as a Saint, the original Trial of Condemnation was the basis for considering her a heretic. In fact, it was as a relapsed heretic that Joan went to the stake.

Fundamentally, Joan was acting within a political context (the Hundred Years' War), and was acting politically in taking sides (with the French) in that conflict. As a result of this, her contemporaries tended to view her depending upon their own political orientation. In particular, her English enemies, under whose auspices her Trial in Rouen was conducted, viewed her as an "Arm of the Fiend", deceived by Satan appearing in the form of an angel, a blasphemer, et cetera.

On at least two occasions (at Poitiers, and apparently also prior to her Trial in Rouen), Joan was inspected by women in order to determine whether or not she was a virgin. Apart from possibly discrediting her completely if she was found not to be a virgin, this "test" also ruled out the possibility that she was a witch, for it was held at the time that a virgin could not be a witch since the pact a witch was alleged to have made with the Devil involved sexual intercourse.

However, it was common among the English soldiery to refer to her as a witch, or as the "harlot of the Armagnacs". Harlotry in some form was necessary in order to support the charge of her being a witch. Later English writers, for example, Shakespeare, also portrayed Joan as a witch. In order to do this, they asserted that Joan was in fact not a virgin. In Shakespeare's Henry VI, part 1, Joan in the end pleads for her life on the pretext that she is pregnant.

While the suspicion or belief that Joan was misled by Satan, or was a harlot and a witch were common among Joan's enemies at the time, almost no one today holds to this view, at least not in this form.

The subject of the nature and origin of the voices and visions which Joan of Arc experienced has been of intense interest not only to her contemporaries, but to scholars, religious figures, and students of history all the way down to modern times.

Joan of Arc on film

The Passion of Joan of Arc (original French title La Passion de Jeanne d'Arc) is perhaps the most powerful treatment of Joan's story ever flmed. Produced in France in 1928 by Carl Theodor Dreyer, it featured Renée Jeanne Falconetti in the title role.

Joan of Arc in poetry and music 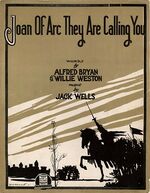 Joan, like many figures of broad appeal to a variety of causes, was soon the subject of popular ballads and poetry. One of the earliest is a poem dedicated to her 1429 by Christine de Pizan, "Hymn to Joan of Arc"; it is the only known tribute composed while Joan was still living. Other treatments include Voltaire's mock-epic The Maid of Oranges, along with Friedrich Schiller's dramatic rebuttal to Voltaire, The Maid of Orléans (Die Jungfrau von Orleans).

In classical music, Joan has been celebrated as the subject of a number of operas and musical dramatizations, most famoulsy in Tchaikovsky's opera The Maid of Orleans (1878-79), based in large part on Schiller's work. At its premiere in 1881 in Saint Petersburg, the role of Joan was sung by Mariya Kamenskaya.

In popular and art music, Joan has also been a recurrent subject. Best-known is Leonard Cohen's ballad "Joan of Arc," which takes as its conceit a dialogue between Joan and the fire which is about to consume her; in its most memorable recording, Jennifer Warnes sings the part of Joan, while Cohen sings that of the fire. Art song treatments of Joan go at least as far back as 1953, when Ballade des Dames du temps jadis, Georges Brassens's adaptation of a poem by François Villon, was composed. In 1982, the band Orchestral Maneouvres in the Dark released two singles, "Joan of Arc" and "Maid of Orleans." In 2005, Kate Bush recorded "Joanni" on her album Aerial.

A different tradition from these art songs can be found in military and patriotic songs which invoke Joan as a leader and inspiration to action; a number of these were popular in World War I and World War II. With titles such as "Joan of Arc They Are Calling You," these songs attempted to evoke a patriotic sense of duty by recalling Joan's bravery in battle.

Joan of Arc in fiction 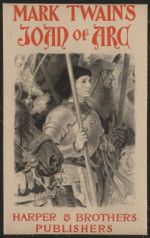 The most ambitious attempt to retell Joan's story in fictional form was Mark Twain's Personal Recollections of Joan of Arc, by the Sieur Louis de Conte' -- a nom-de-plume further identified as Joan's page and secretary. The work is fictionally presented as a translation "out of the Ancient French into Modern English from the Original Unpublished Manuscript in the National Archives of France". Such a conceit was far from new -- indeed Cervantes had used a similar premise in Don Quixote, which he claimed was translated out of Arabic -- but the idea of a serious pseudo-historical memoir was a radical departure from Twain's previous work. The novel was serialized in Harper's Magazine in 1895, and published in book form the following year. The book proved popular, but was widely criticized by the literary lights of the day; despite this, Twain regarded it as his finest work.

Fictional treatments of Joan since Twain's have taken a variety of angles on her story, some quite fanciful. Thomas Keneally's Blood Red, Sister Rose (1974) has Joan taking a turn toward the Occult, while Pamela Marcentel's An Army of Angels (1997), though incorporating extensive research and offering a vivid portrait of the younger Joan, eventually grows heavy with the weight of its ritualistic prose. In her native France, Joan has also been the subject of many fictions; prominent among these is Michel Peyramaure's Jeanne d'Arc (1999). In Brazil, Erico Verissimo's A Vida de Joana D'Arc (1935), a young adult novel, encompasses Joan's entire life in an accessible style.

Joan's story has also been a source for a wide variety of Manga and graphic novels, among them Yoshikazu Yasuhiko's Jeanne and Arina Tanimura's Kamikaze Kaito Jeanne, in which Joan is reincarnated as a gymnastics champion who fights a secret battle against demons that emerge from paintings.