James H. Schmitz (October 15, 1911 – April 18, 1981) was the author of a number of science-fiction fantasy novels and stories which continue to have a strong following decades after his death. The out-of-print works have been republished multiple times. Schmitz stories are remarkable for their bold female characters (surprising even by today's standards), for the sensible and accurate use of science and technology, and also for the author's deft handling of psionics. His writings exist as eight novels and fifty-odd stories in several collections, most of which were published between 1960 and 1974.

Isaac Asimov's Foundation series, begun in the 1940s, was one of the first set of novels to be placed in a recurring universe, but that was in fact a series, the same story roughly continued, to be read in order. This story-linking stratagem would later be brought to high art by other authors, such as (to name a few) Lois McMaster Bujold (Vorkosigan series) and C. J. Cherryh (Foreigner series).

Schmitz was one of the earliest science fiction authors to write multiple unlinked works in a recurring universe. Many of Schmitz' writings fall into one of two universes and have many recurring characters, but the stories seldom cross-reference each other.

Schmitz wrote one set of tales set in the universe of the "Agent of Vega" series.

He created a different universe in the "Federation of the Hub" series that includes over two dozen stories and novels.

The Encyclopedia of Science Fiction says about Schmitz:

JHS has been notable throughout his career for the use of female protagonists in a remarkably liberated manner for the male-centered sf genre. His women characters perform their active tasks in a manner completely free of sexual role-playing clichés; some of the stories could have male protagonists with the most minimal changes. This emphasis on his part is all the more remarkable in that he tends to write full-blown galactic Space Operas, with traditional themes, villains and plots; it is a part of the genre most prone to gross caricature of women.[1]

Even today, Schmitz' writings stand out as including futuristic technology which turned out to be surprisingly accurate (e.g., personal communicators, privacy bubbles). While we see some of what he foresaw in the Internet and other similar inventions, he has carried them farther than humanity has been able to to date. His vivid imaginings about technology also included biology and chemistry, anti-aging techniques and processes, and not just communications. And they notably did not include unlikely things such as transport beams a la Star Trek. The most unlikely part of his imaginings was, of course, the psi capabilities that a few humans sometimes manifested in his stories. But, not all stories included psi.

During the late 1970's and early 1980's, a lively trade existed for out-of-print Schmitz books. Most of the Schmitz works were later reprinted by Baen books. The Baen book reprints have also fallen out-of-print, and in recent years, even public libraries no longer carry them as a result of the move towards electronic books rather than physical books. Most of the works have now been scanned into electronic form and are available through Amazon and other outlets, while the used physical books become rarer and more expensive. Schmitz' best work appears to remain quite popular and well known despite these difficulties.

Agent of Vega is a book consisting of four long stories that were originally published 1949-51 in Astounding Science Fiction Magazine. At least three editions of the book were published.

A Tale of 2 Clocks is a Trigger Argee adventure, and touches on a secretive detective named Quillan, a senior Psychology Service agent named Pilch, plasmoids, and Old Galactics. Trigger is one of two recurring female lead characters for Schmitz. Like Telzey, she is privileged and extremely capable, but unlike Telzey, she has little or no psionic ability. Instead, she is equipped with above average intelligence, training, and a dollop of creativity.

Several of Schmitz' strengths as a writer come out in this yarn. Human perception gets questioned, as the alleged culprits turn out to have a very unexpected nature and motivation. Qualities of "good" and "bad" are played with ironically. Pilch is one example. She is powerful and unrelenting enough to take on a forbidding mien to Trigger and others, and yet the reader believes that she is basically benign. Pilch also appears in other works, as does the resourceful, semi-criminal Quillan.

This story does not move as quickly as some other works, but is nevertheless a thought-provoking and satisfying read.

Front of the ACE fourth printing in 1984, cover art by Steve Durke

The Universe Against Her was first published in 1964. It consists of the first two Telzey Amberdon adventures. If you're new to Schmitz, this would be a good place to start, and it is the seed for several subsequent Schmitz stories using the same lead character, and which occur in a region of space identified as the Federation of the Hub.

The first of the two stories describes how a very young Telzey first learns about her psionic ability, which then allows her to overcome several obstacles and avert an impending disaster. The second story involves Telzey working to gain greater control over her new-found talent and struggling to avoid becoming a tool of the powerful Psychology Service. It will not be her last encounter with the secretive agency, and while she never allows herself to fall under its control, subsequent stories show that she is sometimes willing to work together with the agency when dealing with a sinister power needing to be taken down.

It is probably reasonable to speculate that Schmitz' Psychology Service (appearing in many stories about the Telzey universe) served as a model for a similar agency, many years later, in the Babylon 5 television series written by J. Michael Straczynski. Babylon 5 ran 1993 - 1998, and although its author has not acknowledged any influence from James Schmitz, the similarities in the two agencies are unmistakeable. The Babylon 5 agency's intentions and goals are less transparent, but they are similarly powerful, largely invisible, and characters with and without psionic capabilities fear falling under the agency's iron control.

The Witches of Karres was the most popular of all Schmitz works during his lifetime. It was nominated for a Hugo in 1967 (it lost to Heinlein's The Moon Is a Harsh Mistress). It sold very well and is still very popular. It does not take place in either of Schmitz's usual universes. Though not the favorite of die-hard Schmitz aficionados, it is a fun read. It may have been Schmitz' most popular book ever. In recent years, three sequels were written by other authors besides Schmitz; the 4-book set of books about the witches sells on Amazon for more than $30 as a Kindle book in 2020.

The Demon Breed was first published as a two-part story, entitled The Tuvela, in Analog in September and October of 1968. It appeared as a novel in book form (ACE 1968 edition). It takes place within the "Federation of the Hub" universe, but on a largely water-based planet named Nandy-Cline which appears in this work only.

Unlike other of Schmitz' young female heroines, Niles Etland, the main character of The Demon Breed has no particular psionic ability. The author does equip her, however, with a number of other attributes and tools for the struggle against mysterious demon-like creatures whom she encounters. Like the other Schmitz heroines (Telzey and Trigger), she is able to formulate and carry out complex tactical plans quickly. She is also supremely familiar with her home planet's environment, which the so-called demons are not, and she has various unexpected allies in her local environment. This novel requires more effort than some of Schmitz' work. It requires the reader to gain a detailed understanding of the environment being portrayed. For those who can deal with its the complexity, the story is a great adventure. Unlike most other Schmitz stories, it takes place in a wild habitat and without much aid from technology. Aside from the heroine's unpredictability, adaptability, endurance, and native knowledge, the plot relies on her familiarity with a friend whom she knows is involved, but with whom she cannot directly communicate.

This is the only work of Schmitz which digresses briefly but pithily into a discussion of possible technologies for life extension. The discussion ranges from the social and behavioral aspects, to the biological to the chemical, of any possible old-age treatment strategy. Schmitz brilliantly surmises that human instincts are designed, at the individual level, to discourage longevity studies. This matter is wholly a side issue to the main plot of the novel, but is key to one of its main characters (besides Nile Etland), and it illustrates Schmitz' wide range of reading, interest and speculation about the future impact of technology on human life.

The book ends with a report by various government agencies about what had happened in the novel. In these reports, Schmitz reveals openly his beliefs about humanity's ability for aggression and unpredictability and speculates that, although many individual humans are essentially helpless, there runs a streak of ingenuity and creativeness and aggression in the species so undeniable that other species would do well to steer clear of challenging humanity in general.

The Lion Game is about Telzey Amberdon, a highly intelligent fifteen-year-old who becomes involved in a game played by intimidating kidnappers, with the stakes involving the future of earth and control of the universe. This book was first published as a two-part story in ANALOG Magazine in August and September of 1971, and those were an expansion of 3 previously published stories - "Goblin Night" (1965), "Sleep No More" (1965), plus "The Lion Game" (1971). All of it was published as a book in 1973 that consists of two novellas about Telzey that appear to follow directly upon the story introduced in The Universe Against Her.

The first story is a mystery with horror and science fiction thrown in. Telzey sneaks off from her friends during a camping trip to investigate a distress cry that she sensed. The story is all about what happens to her as a result.

The second story is about the aftermath to the first story, though it takes place somewhat later. Telzey finds herself hunted by the villains she foiled in the earlier story, and she ends up traveling to another planet to confront them at the source. Some people find the second one more complex and hard to follow. 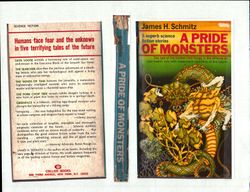 Front and back cover of Pride of Monsters.

A Pride of Monsters is a collection of five stories. It is noteworthy because of the introduction in which Schmitz characterized almost all of his stories as being about "monsters", so-called because they are impending threats that seem at first insurmountable, and yet someone manages to get the best of the seeming impossible threat in the end, though not without considerable cost and danger. The Quillen character of the first story ("Lion Loose") recurs in several Schmitz works about The Hub. No credit is given in the book for the wonderful cover art on the 1970 edition, but according to The Internet Speculative Fiction Database, the cover art was by Richard Jones[2].

As of 2020, this (paperback) book is out of print and not available electronically. The contents of the book are:

The Eternal Frontiers is a classic murder mystery and horror story set in a futuristic science-fiction world, not on Earth. It begins like Edgar Allan Poe's Murder in the Rue Morgue, with the discovery of grisly remains, and then goes on to the investigation into what unusual perpetrator could, or would, do such a thing. It's scary, it's plausible, it's exciting, and it has a reasonable ending. It is a short novel (small-book sized), or a very long short story.

The Best of James H. Schmitz is a posthumous collection of ten stories that was published in 1991 by NESFA (New England Science Fiction Association). The book is now out-of-print. Its contents include: