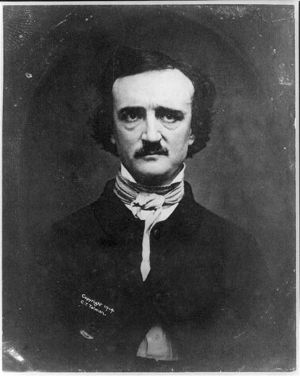 Edgar Allan Poe (January 19, 1809 – October 7, 1849) was an American poet, short story writer, playwright, editor, critic, essayist, and one of the most prominent figures in the American Romantic Movement. Best known for his tales of mystery and of the macabre, Poe was one of the early American practitioners of the short story, the first writer of detective fiction and crime fiction, and is sometimes credited as an important progenitor of science fiction as well.

Poe was born as Edgar Poe in January 19th, 1809, to David Poe, Jr., and Elizabeth Arnold Hopkins Poe, both of them moderately successful stage actors. The family's fortunes took a turn for the worse when David Poe abandoned his family in 1810, and the year following, Poe's mother died of tuberculosius. Poe was taken in by John Allan, a wealthy merchant in Richmond, Virginia, who in his generous moods lavished attention and money on his foster son, while at other times playing the stern disciplinarian. Throughout Poe's younger years, Allen seemed strangely oblivious to Poe's desperate need for a sense of belonging. He sent young Edgar to a boarding school in England which, to judge from Poe's later story "William Wilson" (set in a fictionalized version of the school) only furthered his sense of isolation.

In an autobiographical note written in 1842, Poe briefly sketched out the particulars of his early life:

"My father and mother died within a few weeks of each other, of consumption, leaving me an orphan at two years of age. Mr. John Allan, a very wealthy gentleman of Richmond, Va., took a fancy to me, and persuaded my grandfather, Gen. Poe, to suffer him to adopt me. Was brought up in Mr. A.'s family, and regarded always as his son and heir — he having no other children. In 1816 went with Mr. A.'s family to G. Britain — visited every portion of it — went to school for 5 years to the Rev. Doctor Bransby, at Stoke Newington, then 4 miles from London. Returned to America in 1822. In 1825 went to the Jefferson University at Charlottesville, Va., where for 3 years I led a very dissipated life."

Most of this was in fact true, though Poe glosses over his oftem turbulent relationship with John Allan. As to the University of Virginia, which had (and has) a strict code of honor, Poe was entirely frank; his drinking led him to neglect his studies, and he accumulated considerable debts from gambling. Poe later claimed that Allan had not sent him with sufficient allowance for books, room, and board, but even though Allan sent more money, Poe's debts grew worse. Either because of his poor performance at the University, or spurred by the disappointing news that a childhood sweetheart had married another man, Poe dropped out and headed north to Boston, where he sustained himself with a variety of odd jobs.