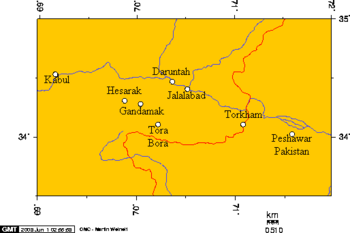 Present-day Jalalabad was the major city of the ancient Greco-Buddhist center of Gandhara. Babur, founder of the Moghal empire of India, chose the site for the modern city, which was built c.1570 by his grandson, Akbar. During the First Afghan War, British troops held (1842) Jalalabad against an Afghan siege. [1]

The city has a university and medical school. Oranges, rice, and sugarcane grow in the fertile surrounding area, and the city has cane-processing and sugar-refining as well as papermaking industries.

It lies one of the first paved roads, connecting Afghanistan's capital Kabul, with the border crossing at Torkham, and ultimately to Peshawar, Pakistan.

It has an airport used only for military and United Nations flights.

Jalalabad is northeast of the rugged areas of Tora Bora, which al-Qaeda and Taliban survivors used as an escape route to Pakistan in 2001-2002.