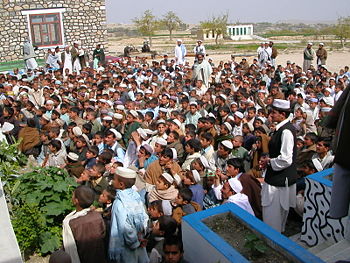 Nangarhar Province, whose capital is Jalalabad, is in the east of Afghanistan, on the Pakistani frontier, which forms its south and eastern sides. Kabul Province is on its west, Laghman and Kunar Province to the north, and small borders with Logar and Paktiya Province in the southwest.

Highway 1 traverses it from the border with Pakistan at Towr Kham, through Jalalabad, and eventually connecting to Afghanistan's capital, Kabul.

Osama bin Laden was believed by the U.S. military to have been hiding in a complex of caves and underground bunkers in the Tora Bora mountains, in Nangarhar, following the US invasion, in late 2001.

It is in the Eastern Regional Command of the International Security Assistance Force, and the Afghan National Army 201st and the 203rd Corps. There is a U.S. Provincial Reconstruction Team in Jalalabad.

The western and northern districts, away from the border, are relatively safe. Insurgents in the Haqqani Network and the Hezb-e-Islami Gulbuddin present problems in the southern districts of Khogiani, Pachir Wa Agam and Chaparhar. There is tribal violence, and street crime in Jalalabad.

It is a major agricultural area, and, in general, the population closest to the river are most strongly pro-government.