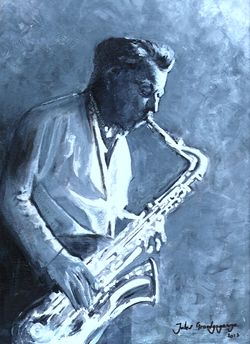 Jean-Jacques (Jack) Sels (Berchem, near Antwerp, January 29, 1922 – Antwerp, March 21, 1970) was a Belgian jazz musician, arranger and composer. He is now considered to be one of the most remarkable Belgian post-war jazz saxophonists.

Jack Sels grew up in Antwerp. As a teenager he started collecting jazz records. Due to a substantial inheritance from his father, his collection grew to about 10,000 records, but it was destroyed in Second World War bombing. After first having studied piano he taught himself the tenor saxophone. To earn a living, he worked in an ice cream parlour in the Antwerp Hoogstraat (High Street) and spent much time listening to his jazz idols, among them the tenor saxophonist Lester Young, trumpeters Miles Davis and Dizzy Gillespie and alto saxophonist Charlie Parker. After the Second World War many American and Canadian soldiers arrived in the port of Antwerp and Jack Sels loved to talk to them and listen to the new records they brought with them from the United States. It also enabled him to further expand his record collection.

The arrival of Dizzy Gillespie's big band in Antwerp in 1948 made a lasting impression on Jack Sels and he decided to start his own big band, for which he would also write the music. The band made an impressive debut with some of the best musicians of the time—on trumpet: Paul Heyndrickx, Charlie Knegtel, Theo Mertens, Herman and Nick Sandy Fissette; on trombone: Nat Peck, Frans Van Dijk, Jan Mertens and Christian Kellens; on sax: Jay Cameron, Marcel Peeters, Gene Verstrepen, Bobby Jaspar and Roger Asselberghs; plus Jean Warland on bass, Francis Coppieters on piano, and percussionists John Ward, drums, Rudy Frankel, conga, and Vilez Bill, bongos. But because of financial and other problems it was hard for him to hold such a big band together. In 1951, he formed a smaller band with 15 musicians, modelled on that of his idol Miles Davis, and later a still smaller group with which he toured in Germany. Back in Belgium, in 1954, he recorded six tracks in boogie style for Ronnex Records and performed on stage with Nat King Cole.

In 1955 he composed the soundtrack for the movie "Meeuwen Sterven in de Haven" (Seagulls Die in the Harbour) by Roland Verhavert. From 1958 on he worked on radio programs for the NIR, the later BRT radio, and, on behalf of the Adult Education department of the Ministry of Culture, he toured Flanders to promote jazz music. In 1958 he and his group played at the World Exhibition in Brussels.

Although Jack Sels played with jazz legends like Dizzy Gillespie, Lester Young, Lou Bennett and Kenny Clarke, his fame did not spread worldwide because of his choice to stay in Antwerp. But even though he did not get an international breakthrough, he was always held in great esteem by jazz connoisseurs and the musicians he played with.

During the last three years of his life his health declined, making it very difficult for him to play. He suffered a heart attack at his Antwerp home and died on March 21, 1970.